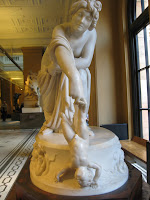 On Friday we went to the Natural History Museum. It was pretty good. We didn't get to see the animals but we did get to see the areas about the earth's crust, volcanoes, earthquakes. There was a big area about geology and rocks.

Part 1 of our London Photos!

Then we went to the Victoria and Albert Museum which is right across the street. There was a special exhibit called the Power of Making. It had things like a Lego Dissection Frog, a gorilla made out of coat hangers, a bicycle make of mahogany wood, a special suit made for Stephen Hawking and a special kind of modelling material that can fix all sorts of things. Unfortunately we could take any pictures in that section, We had lunch in the courtyard of the V & A and walked through the sculpture gallery. I liked the one of the dipping of Achilles by his mother. 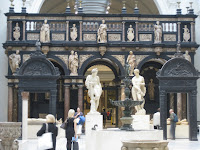 We also went through the area showing British History of the 1600 - 1760's. We saw a statue of Handel and a bust of Shakespeare. We say different types of decor like chinoiserie, rococo, palladianism and Jacobean. There was a place where you could design your own monogram and crest but the e-mail function didn't work. 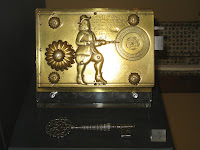 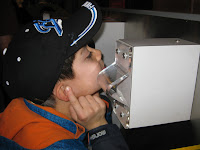 There was a lock which was very intricate. The key hole was hidden behind a man's leg and you had to push his hat to "cock the lock".  There was a counter so that you knew if anyone had went in. Once it reached 100 you couldn't open the lock until you pushed a secret button on the shoulder to reset the counter to one. On the right I'm "hearing" sounds without my ears, using vibrations going through my teeth and skull! 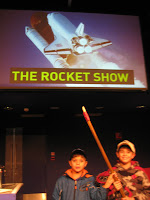 The Science Museum was also close by. I liked watching the Rocket Show the best. She talked about Sir Isaac Newton, the Space Shuttle. The Space Shuttle is so fast you could go from London to Brighton in 15 seconds or London to Paris in less than a minute. She blew up 2 balloons filled with hydrogen and a Pringles tube rocket. There was a great hands-on LaunchPad with lots of things you could do. 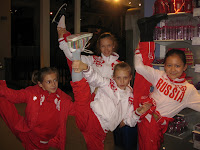 At the Museum we met a group of Russian gymnasts who posed for us so we could get their picture. All these Museums were in the South Kensington area close to Hyde Park but we didn't get there because we were too tired.
Posted by Anonymous at 21:22