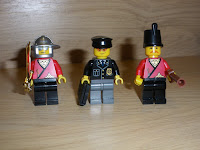 Yesterday we went down town and went to a few museums,  and Buckingham Palace. Then we found a Lego store in a huge mall. it wash't actually that big but it did have some interesting things, like a Lego man ice cube mould that can also be used as a Jello mould! I also liked this TV and with some star wars Lego boxes you can hold them up to the scanner and it will show you what it looks like in 3D and it even shows the gadgets that are  in the set in action. and we also made our own mini figures! 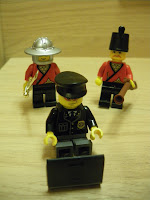 There were also star wars watches for kids and adult Lego watches for the adults there were clone troopers and Darth Vader, on the Darth watch it said "you don't know the power of the dark side". We  would have gotten one for dad but they were 25 pounds. they also have Star Wars alarm clocks and there is one from the dark side and one from the good side, from the good side there is Yoda and on the dark side is his fearsome enemy Darth Vader. there was also a place where you could buy pieces but they were more regular pieces.
Posted by Anonymous at 09:04