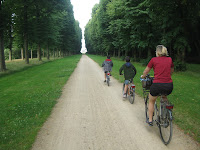 Today (July 27) we went for a long bike ride, it was about 30 kilometers and took us 4 hours total including all of our stops and things like that. We went to 3 castles, they were newer castles, probably around 200 years old each. 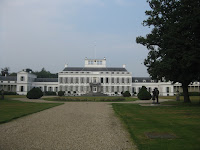 One of them is now a hotel (Hotel Lake Vuurge), one was the recent queens palace (Paleis Soestdijk), but now that she has died, the Netherlands doesn't know what to do with it. The last one (Kasteel Groenveld) is a museum now, but is getting renovated for a conference, but we could still go into it. 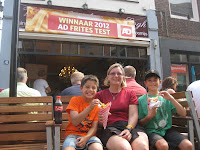 As an added bonus, we also biked down to Amersfoort later on for Happy Hour at Van Gogh Frites!

We also stayed up for the olympic opening ceremonies,  the best part of the show for me was with Mr. Bean in the Orchestra, he pretty much only had one key to play which he could do with one hand. So first he got out his phone, and started doing something on it, next he sneezed, and since his backpack was just a few inches away, he had to get an umbrella to play the key while he reached for his backpack, to blow his nose. After that he started daydreaming that he was in a race across a beach, in his daydream he was falling behind, he saw a car, so he went and got into it, then at the line he got out, tripped the guy in first and won the race. 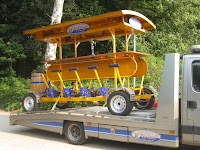 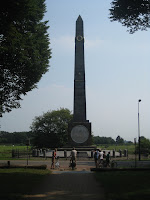 This here on the left, is a bar and a bike combined, you can rent it for a party, and it has 10 seats, all with pedals to move the "bike." all of the seats are made facing into the table because it is also a bar where you can drink beer while you ride, the owner of this bar/bike is the one who drives, and doesn't have to pedal!! and  guess he isn't allowed to get drunk with the people renting his bike. The dangerous part is that none of the seats have backs, so people can fall off if they get too drunk!!

Daddy wants to get one for the next Pez party!
Posted by Anonymous at 08:47