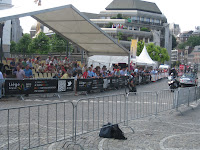 "Shut up legs!" is one of the most famous saying by Jens Voigt. There's even a bike club in Toronto called Team SUL! Others of his saying are when he is told that he won't be getting any help during a race, he just says "I don't care, I am Jens Voigt. I'll do it myself." In some interviews he has said "When your body just can't handle it anymore and your legs are telling you that they can't stand it anymore, you just have to say shut up legs." He says all of these things in his German accent which makes it especially funny!!
He is one of the riders whose job is specifically to get water for the team, catch breakaways, lead breakaways, and things like that. And he's almost as old as Daddy and still riding people's legs off! This is a picture of Jens racing the prologue time trial at Liege. So far in the Tour, he spent a week riding at the front protecting the yellow jersey, then right after that spent the first 50 km of the next stage attacking!
Here is a Pez story on the bike hotel that Daddy stayed in in Italy.
Posted by Anonymous at 08:38