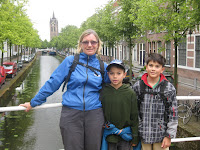 We spent today (July 17) touring the western town of Delft. Like Brugge, it's just an incredibly beautiful small town/city, perfect for walking and wandering. Delft is the hometown of the famous painter Johannes Vermeer, of "Girl with a Pearl Earring" fame. It's also home to the famous Delft Blue earthenware. And of course, what would a Dutch city be without a series of beautiful canals? 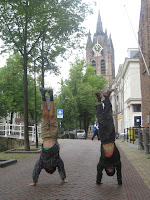 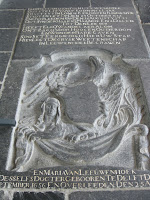 Two kerks dominate the town centre - the Oude Kerk behind the boys (1240 AD) and the Nieuw Kerk (1380s). Again, Pisa's not the only town with a leaning tower, just the one with the best PR firm. The Oude Kerk's tower leans rather scarily over the canal! Inside the Oude Kerk is the gravestone and mausoleum of Antoni van Leeuwenhoek, one of the pioneers of microscopes and seeing the incredible world previously unseen. 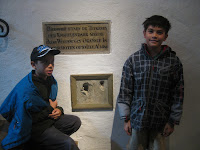 Another very famous person buried in Delft, with a mausoleum in the Nieuw Kerk, is Prince William of Orange, who led the rebellion against the Spaniards ruling the Netherlands. This was part of the 80 years war, and we saw a good bit of it detailed at the Prinsenhof Museum. At the Prinsehof itself was St. Agatha's Convent, where William was murdered by a Catholic. Those are the bullet holes from the assassin's (Balthazar Gerrard) pistols there from July 10, 1584. 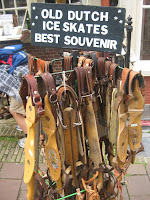 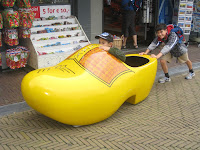 At least the Dutch are more original with their souvenirs than some other places we've been to on this trip. Looks like they've raided the town's attics to collect old strap-on ice skates on the left, and the giant clog on the right can double as a bobsled! 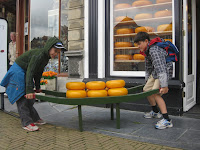 Also found this rather cool cheese shop on the main Markt. All sorts of pretty exotic cheeses, including green pesto and red pesto cheese, smoked cheese with chili, and all sorts of goat and sheep cheese. The boys tried some samples, then tried the old "dine and dash" routine with a cartload of cheese!