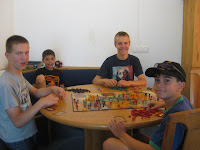 on July 4th we went on a few trains to brussels to see our friends the Beskys, And we stayed over night, we also played one game of "Lord of the Rings risk" and one game of "Star Wars risk." It's a bit hard to tell which one I liked the most. Then we took 2 trains to Brugge and had some pizza then we went back to the hotel. 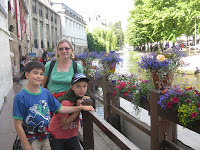 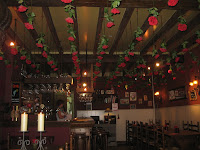 Waiting for the boat tour on the left. Our hotel's cafe on the right.
The next day we went to 2 art museums, the Kamarama, and the Groninge museum. then we found a good boat tour, but we waited until we had found dad to go on it so when we found dad we went on it it was very good an I also liked the things that the tour guide added in like the crocodiles in the canals. 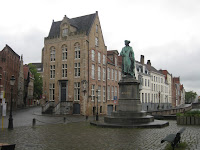 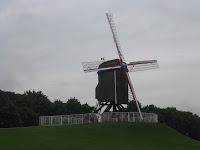 Jan van Eyckplein on the left, lots of windmills along the canals on the right.
The next day we climbed up the belfry and then went to a special Pablo Picasso exhibition. then we went to the hotel and had a nap then we went to Pizza Hut for dinner.
Posted by Anonymous at 08:14