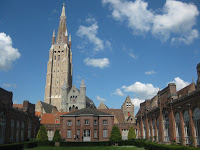 Just spent the past 4 days at the European College of Sport Sciences meeting in beautiful Bruges (Brugge in Flemish) Belgium with the family. Bruges is a really beautiful small medieval city, with canals and cobbled streets running throughout amidst massive churches and windmills too. Organized by my fall host Romain Meeusen from VU Brussels, it was also a great opportunity to see the group there again. I presented the Everest project that we performed during my time in Helsinki.

I do have to say that I enjoy the ECSS much more than ACSM. It's smaller, there's generally more environmental physiology stuff, most of my scientific friends are from Europe anyway (and the Aussies generally all come), plus did I mention that it's in Europe rather than North America? The lead photo is within Oud Sint-Jan (conference site), which started as a hospital in 1180AD until 1978. That's Notre Dame in the back, and a cafe on the right with Boonen's Belgian champs jersey 2009. 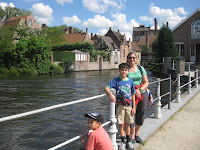 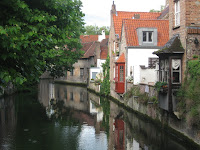 Lots of history in Bruges, and the numerous canals just make for a magnificent walking experience. We also took a boat tour along the canals in between the rainstorms. 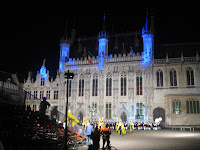 Friday night, I stumbled across a big marching band festival at the main city hall (stadhuis). Well, the music was pretty hard to miss! There were about 6 pretty impressive bands performing for over 3.5 hours. Walking home from dinner, we actually stumbled upon one of the bands performing and marching en route to the concert, so we tagged along behind them. The highlight was the belfry carillons playing "Auld Lang Syne" while the audience hummed along. 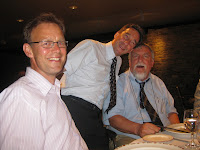 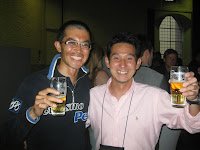 Any time you're with Romain (centre of left photo), you're guaranteed to eat very well. Thursday night, a few of us were treated to a great meal downstairs of the Grand Plaza hotel, amidst the ruins of walls from Viking times and where Charles the Great was supposedly murdered. In the left photo are also Jos de Koning (Amsterdam) and Carl Foster (Wisconsin), two friends and experts in pacing strategies. On the right is Hiroshi Hasegawa from Japan, who spent two years as a post-doc with Romain and who pioneered a lot of their work on neurotransmitters during exercise and heat stress.
Posted by Unknown at 09:02