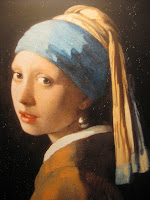 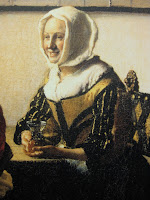 The house where Vermeer was born is now a cafe. When he was 9 years old, he moved with his family to the Mechelen Inn, which is also still standing but with another use. Vermeer's father was a inn-keeper and art dealer, so the young Vermeer grew up surrounded by art and artists. 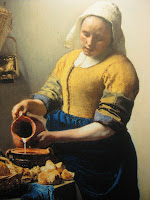 He converted to Catholicism to marry Catharina Thins and lived with her wealthy mother - Maria Thins. The house where they lived together on the Oud Delft canal is now the site of a church.  It is very close to the Nieuw Kerk where Johannes and his sister were baptized. Johannes and Catharina had 15 children together, 4 of whom died at young ages. Johannes himself died at the age of 43 leaving Catharina with 11 children and a mountain of debts. He is buried in the Oud Kerk near the main Markt. 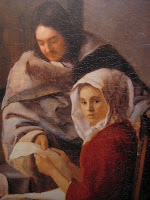 Artistically, Vermeer had a remarkably small oeuvre. It is thought that he only painted 40 - 60 paintings during his career and only 37 of them survive, although there is some dispute as to the authenticity of some of them. There are 5 Biblical scenes, 2 landscapes and the rest are "tronies", paintings of a certain type (ie peasant women, old man etc). Many of his paintings show women or groups in small intimate indoor scenes. 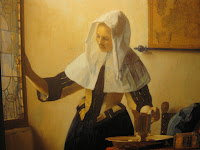 The Vermeer Centre doesn't have any actual paintings but they have copies of 37 that are the actual size with descriptions and locations.  We have seen several of the originals at the Rijksmuseum, Amsterdam and Gemmentemuseum, Den Haag but "the Girl with the Pearl Earring" is on loan in Japan during renovations at the Mauritshuis Museum at the Hague. 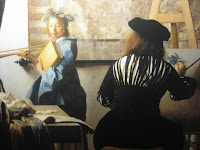 Vermeer is best known for his amazing use of light and the fact that he used a relatively small palette of colours to achieve spectacular results. The remainder of the centre concentrated on his use of light and colour and all the emblems of love that are contained in Vermeer's work. 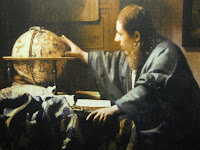