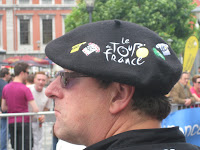 On June 30 we went to Liege to watch the start of the Tour de France. To get there we had to go on 4 trains, first we went from Amersfoort to Utrecht, then Utrecht to Maastricht, Then from Maastricht to Liege on an old run down Belgian train. after that we had a 6 minute train from 1 station in liege to another. 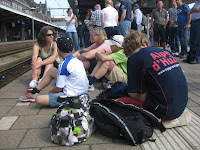 The train going from Maastricht to Liege was probably the worst train I have ever been on, and probably the oldest one as well. The old train kept being delayed at the stations because they were trying to fit more people in but no more could fit. It was only supposed to  be a 35 minute trip but they delayed it so much that it ended out being over 2 hours not including waiting for it. 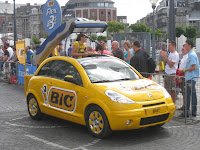 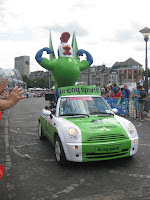 We got to the race at about 12 o'clock. and got there just in time for the publicity caravan, after the caravan we watched the riders warming up on the track which was 6.4 kilometers. This 6 kilometer track took the riders about 8 minutes to finish. 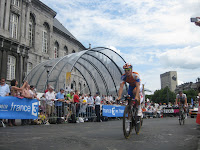 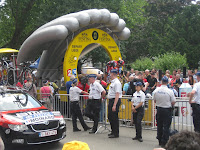 the rider came out of a starting house that looks like a wheel 1 by 1 (because it was a time trial) a minute apart. In front of each of them was a police motorcycle and behind them was a team car with the last name of each of the riders. in between each rider there was a 1 minute gap before the next rider went. 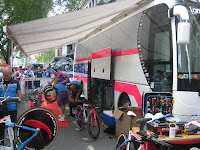 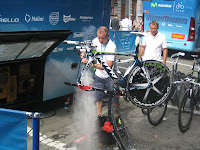 As usual, Daddy managed to sneak in where he wasn't supposed to be, in this case the team warmup area where all the buses were set up and the riders warm up on the trainers beforehand. On the right he was so close he nearly got soaked by the team mechanic washing the bikes - maybe that will teach Daddy!
Fabian Cancellara came first in the stage, next came Bradley Wiggins and third place went to Sylvain Chavanel. Fabian Cancellara only took 7 minutes and 13 seconds, and the slowest guys still took less than 8 and a half minutes!!
Posted by Anonymous at 09:13