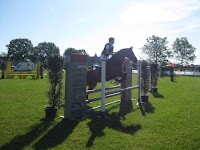 Wow, it's our 300th blog post - let's go biking!
By now, you know that we adore the cycling scene and scenery around this part of the Netherlands. Except for the constant strong SW wind and the regular but random rain of course! Riding by the big local park in Hoogland, we came across a big equestrian tournament one weekend. By now we've shown you lots of sheep, horses, ponies, etc. Here are some other sights in our part of the world seen while out on the bike. 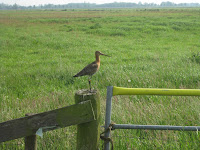 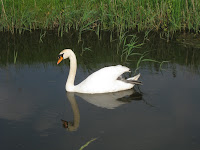 You'll certainly find birds of all sorts around, due to multitude of canals and marshes in the area. It's rather bird-heaven in that way, so lots of herons about too. With all the fields too and hence small mammals, there are lots of predator birds flying about too. Oh yeah our street "Kraailand" means "Crowland." 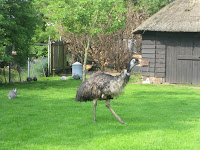 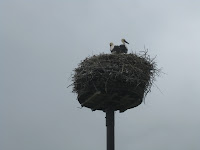 Also a few more exotic birds roaming about. On the right some folks have built a big platform for storks, and they were feeding their babies while we watched. On the right is a big emu - don't think they're native here! 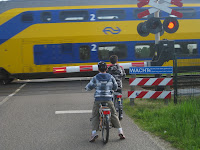 You'll certainly see rail tracks and have to stop for trains quite often riding around the Netherlands. The trains here are really efficient and extremely frequent. We've seen very few freight trains but lots and lots of passenger trains. Definitely do NOT even remotely consider running the lights or barriers, for these things FLY! 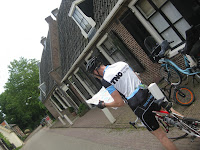 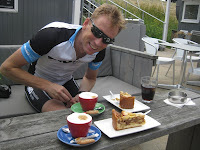 And even though you're in a country where bike paths and directions are supremely well-marked, if you're riding with Eric, sooner or later you're going to see him riding in loops very quizzically. After leading you on for about 30 km more than you've bargained for, he'll eventually admit that he's not completely sure where the heck we are. As a redeeming feature, though, that will usually be followed up by coffee, apple pie, and good laughs!
Posted by Unknown at 08:34