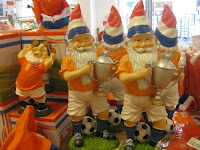 Every 4 years, the Euro football tournament madness sweeps over the continent. The World Cup may be bigger, but the overall quality of the football is probably higher here, because there's really no easy way to qualify. Anyway, after being finalists in World Cup 2010, all of Holland was in full orange frenzy. 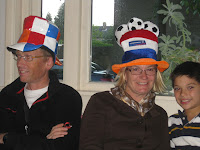 Well, that didn't last long! The whole country was decked out in orange, but boy the Dutch stunk out the joint! They lost a bit of a shocker to Denmark 0-1 in the first match, then got absolutely humiliated 1-2 by the Germans in a highly hyped match. To top that off, Cristiano Ronaldo and the Portuguese finished the humiliation with another dominant rout. Oh well, the good thing with the Dutch is that they party BEFORE the match rather than afterwards, so we still ended up having a fine BBQ at Hein and Elly's before the final match! 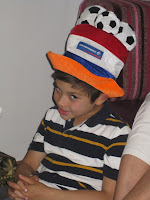 At halftime, down 0-1, Hein drove us back to Amersfoort and we raced home on the bikes (never seen Jacob ride so fast!), literally getting home JUST in time to see Ronaldo score again! Jacob was so disgusted that he just stomped upstairs and went straight to bed!

Italy-Spain in the final on Canada Day, should be great!

In other sporting news, we're taking the train Saturday down to Liege to catch the prologue of the Tour de France! BTW, figure out this math for me. My taking the train to Valkenburg (southern end of Holland) three weeks ago normally cost 46EUR return for one adult. Liege is even further away, further south, and in another country, yet the TOTAL cost for 4 of us (2 adults, 2 kids) return is 76EUR! And speaking of kids, Zachary's grounded as of July 26, when he turns 12. That's because all the travel discounts are for 11 and under (e.g., a full day unlimited train pass is 48EUR for adults and 2.50EUR for kids!)
Posted by Unknown at 08:01