August 3 Wednesday 2011
Today we moved to the Atlantic Ocean near Grimstad on the south coast of Norway. We checked out the cabin which is in two parts 1 half has all the beds and the other has the kitchen and the living room and everything else. There is no bathroom but luckily there was a pre-made hole with a little shed around it for an outhouse so we didn’t have to dig one. After we checked out the house we went to the Ocean and took a plunge, which was pretty warm though not as warm as Crete.


August 4 Thursday 2011
Today we missed the before breakfast plunge but we made up for that in the afternoon. We took the upgrade from canoe to motorboat and went to a lake and tried some water-skiing. that almost worked the first time for me but just got steadily worse. Jacob tried it as well but his feet were a bit too small for the skis. Then we all went to land and had about a half an hour nap. Then we packed up and headed for home because it was raining. But on our way home we caught some mussels to catch crabs with tomorrow, with me holding my breath and swimming underwater to grab the mussels. Then we finished going back home and Olaf made fish balls for supper. Another night we had home-made pizza for supper.


August 7 Sunday 2011
Yesterday we were going to use Olaf’s telescope and look at stars and other things in the sky. We were having a nap but Olaf and dad didn’t wake us up because it became cloudy Olaf and dad still saw some stuff but when we were looking at the pictures we noticed there were some really amazing things there was even a satellite go by. The Chico song (Daddy and Olaf were members of the infamous Congo Band in Barcelona in 1994) even came out and they recorded it to listen to on the way back. The stars looked like little lines because the earth is spinning so the telescope moved with the earth, even in the space of 10 seconds. Today started out really rainy but ended out with a lot of action.


We are returning from the south of Norway where Olaf’s cabin is to Oslo. At the cabin we swam, fished, hunted crabs, tried to water-ski, played games, and went to the town which was called Grimstad where I bought a tee- shirt that was made of a jersey kind of material for Only129 Kroners (or around 28 dollars cad) with money Olaf gave me. Jacob and I also bought a game called Ubongo Extreme (Olaf has Ubongo) which is like Ubongo but scoring and shapes are different it is a really good game. Today we also ran to the highway and back it was 3.9KM altogether it took 26:08 minutes and it took Olaf about19.30 minutes. After that we decided to go for a dip to cool off we decided that all five of us should jump off the pier at the same time Olaf forgot his video camera so we had to take pictures instead. We were waiting and Olaf said if it didn’t start clicking in 10 seconds he would check the settings and just when he got there it started clicking and 1 second before we jumped it stopped so we had to do it again and instead of a nice cool down we almost froze. The next time we got these really cool pictures but the water felt even colder! 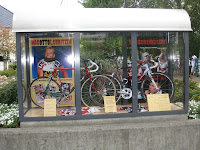 August 4 we went for a walk in the nearby town of Grimstad. We had a snack at the pharmacy where Henrik Ibsen worked at the start of his career. Grimstad is home to 2 really famous cyclists Dag Otto Lauritzen (who was one of the stars when daddy started following cycling) and Thor Hushovd who is now the current world champion. in the picture there is a display for these two great cyclists it even has their bikes! Daddy actually met Dag Otto Lauritzen on a roadside coffee shop all alone drinking coffee so he got a picture and talked a bit. 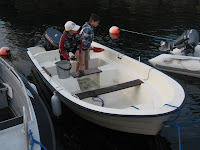 Before we went fishing we had to bail out the boat because it had rained the night before this is Olaf's motorboat that we fished, hunted crabs, and water-skied in you can see the grey bucket that is the bucket we kept the mussels in. The engine is 25 horsepower. 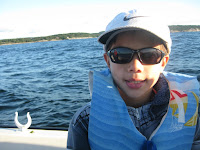 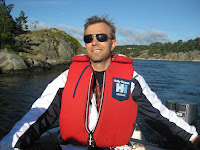 Here are pictures of 2 great fishermen! On the right is captain Olaf steering the boat and on the left is Jacob in the boat. There is an Island that looks like a Submarine Olaf says that they call it Submarine Island. 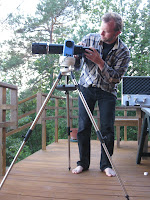 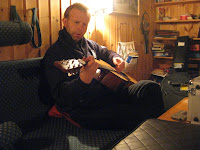 On the right is Olaf playing the Chico song (in the official version you are supposed to sing it for 2 and a half hours of until the police tell you to knock it off but dad and Olaf only did it for 10 minutes) and on the left he is setting up the telescope.