Posted by Zachary and Jacob about Saturday 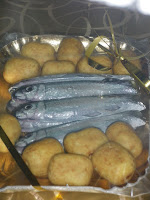 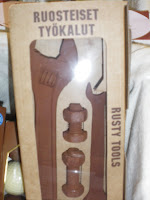 More chocolates at the Old Market! Believe it or not, but those are chocolate potatoes there are also the fish wrapped in tinfoil. Aren't the potatoes a good imitation they actually have "dirt" on them! then there is a whole tool set with the wrenches and some bolts. I think there are a lot more on the Flicker album, there was even a baby bottle.

Videos and pictures from Night of the Arts! 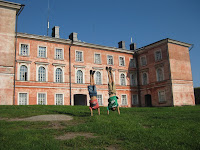 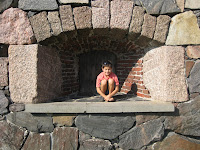 On the left we are doing a handstand on the island of Suomenlinaa in front of one of the residential buildings. on the right is a picture of Jacob showing how small the door is! It is an optical illusion the door is actually only less than a meter behind Jacob. Suomenlinaa means "Finland's Castle" and was an fortress first built when it was a part of Sweden in 1748 to guard the entrance to Tallinn. There are four islands connected by bridges and cobbled streets, with lots of different museums like a submarine, a former prison, and a Naval Academy. There was a wedding at the big church too. It was free to take the city ferry across with our transit passes. 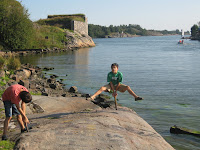 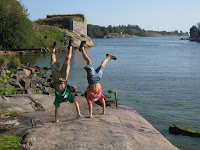 Here we are goofing off by the water 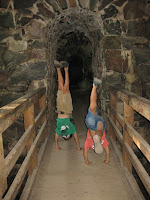 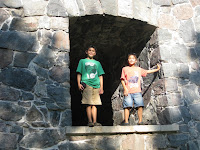 On the left we are doing a handstand in a tunnel at the end you can't see any thing so we sent a flash of the camera down the stairs and saw that there was a "do not come down the stairs" sign where you wouldn't notice it at the bottom of the stairs. On the right we are standing in one of the windows of the castle.

by Jacob
For lunch I made the wrong choice between soup and  a sandwich with cucumber  (which I hate) and so I had a cucumber meltdown.
Posted by Unknown at 07:14