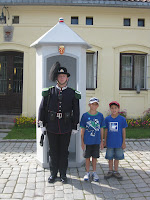 Today was much like yesterday. We used our Oslo pass some more. First, we went to the Oslo Reptile Park. There were even a few tarantulas and marmosets and a parrot! There were a lot of reptiles such as the Phantom Poison Frog, Red Tailed Racer, African Soft Shelled Turtle, Goliath bird eating spider, Bearded dragon, and those are only a few. They even had piranhas (if they don't get fed enough they will eat each other). Then we went to the Museum of Design where there is a lamp that is in the shape of a parrot. Then we went missed a few bus stops before getting to the International Museum of Children's Art where kids as young as 3 painted pictures and they collected them. Then we missed another bus and had to wait about 5 minutes for the next bus to take us to the Castle but the Castle closed before we got there so we went to the Armed Forces Museum. The last museum we went to was the Nobel Peace Museum then we took the transit home.
More pictures from our museum blitz! 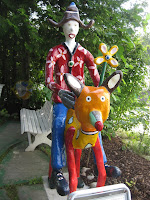 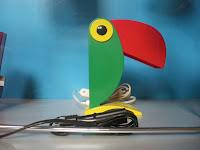 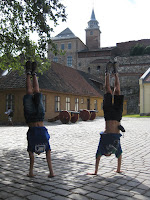 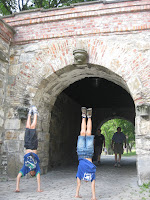 Some handstands at the castle. 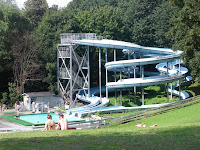 After the Museum of design we went to the Frognerbadet water park where at the low diving board I tried to do a front flip but ended out doing a 1 and a quarter flip. These Norwegians are crazy. You have to pay to get into the waterpark and you have to pay 2 dollars cad for one ride on the waterslide when you can kill yourself for free on the diving boards!

Note: we will not be posting again untill after sunday because we are going to Olaf's cabin which doesn't have internet.