Night of the Arts in Helsinki

Friday was the 23rd "Night of the Arts" in Helsinki, an annual city-wide festival where artists of all kind perform throughout the city in restaurants, museums, shopping malls, and throughout the streets. With the terrific weather, the city was packed. Teenagers mainly used it as an excuse to gather en masse at Toolonlahti (a bay/lake near our apartment) for a massive underage drinking party, but others do seem to enjoy the actual arts scene.
Videos from Night of the Arts
For us, we wandered down the esplanade, then over to Kampii area to catch a cool bluegrass band that looked like the "Bears Jamboree" band from Disney, complete with banjo, big double bass, and washboards for instruments, along with big shaggy hair! The big feature for us was the medieval jousting tournament (see pictures and captions by Jacob below). Lots of other musical highlights that you can check out on the Flickr album link, such as the choir in this beautiful old church, the rock band playing from a crane suspended about 10 stories high on Hesperiankatu, along with the bluegrass band and the opera singer from the balcony. 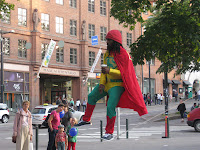 This is a picture of a guy on a tight rope who was on for a long long long time. He is even drinking coffee. 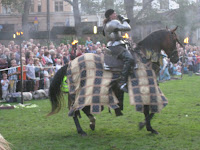 This is a picture of one of the knights from the medieval jousting. the jousting was cool because they charged and speared heads and the bodies blew up, then they rode passed and chopped cabbages off of poles, then they had small hoops on poles and stuck their sword through, then they jumped over the fire and stuck  their spears into the target, then they did the jousting with spears but no body fell off their horse, then they had a fire battle and one of the night's  hair cought on fire. 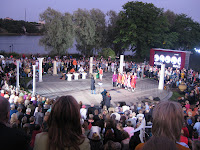 At the Opera House (Ooperon) there was a "Finnish Idol" type TV show filming about choirs and poetry and whether they work together (at least that's what we think given our meagre Finnish!). Anyway the scenery with Toolonlahti behind was quite nice! 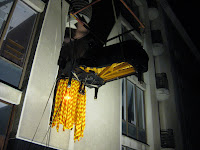 this is a picture with somebody on their balcony with a crane holding up the grand piano. An opera singer performed from the balcony to the big crowd below.
Posted by Unknown at 09:12