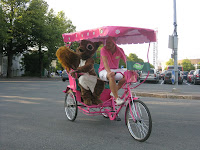 In the midst of travelling, you're guaranteed to come across some strange sights, but a pink bicycle rickshaw pulling a giant squirrel around Olympic Stadium?

This past Saturday was our first real day of playing tourist. Our apartment is 3 km walk to Seurasaari Island, a park that became very popular with Helsinki residents in the mid-1800s. It's now connected by a long wooden bridge as a pedestrian only park. So the boys and I hopped on the #24 bus and met Debbie, who took the opportunity to get in a nice walk. The island also houses an open air museum of numerous building brought here from all around Finland, including a big stave church, farm buildings, big boats used to bring people to church, and parish buildings.

The Dalai Lama is visiting Finland this weekend. Therefore, after walking through Seurasaari, we went home and watched his public lecture on "The Power of Compassion" that was being live webcast. It was impressive seeing his humanity on display, and his message of how true personal happiness can only be based on compassion for others was simple and powerful. 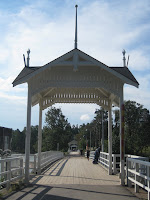 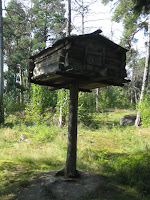 On the left is the long wooden causeway bridge to Seurasaari Island. On the right is a storage shed used to keep food way up high and out of the reach of bears! 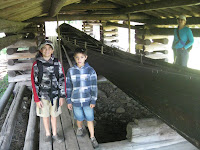 Here's one of the very long boats used in many Finnish communities to ferry parishioners to church. I guess this makes it very obvious who is late for church by who's soaking wet from swimming! 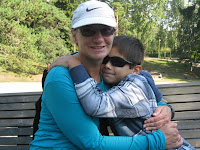 This is how the Cuddle Bear recharges his batteries! 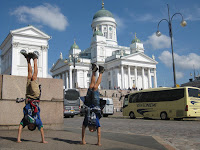 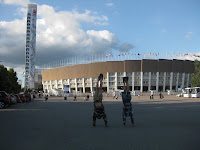 You might notice an improvement in the boys' handstands after a week of training and shaking off the rust from 5 weeks of lounging by the beach and eating pita gyros and fish balls! Left is at the National Cathedral, and right is at the Olympic Stadium (1952 Games). 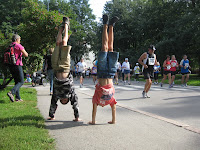 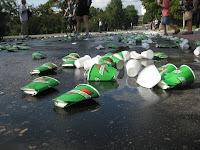 The Helsinki City Marathon "ran" this Saturday. Started at Olympic Stadium by the statue of famed Finnish runner Paavo Nurmi, then looped by our apartment on a big lap around the western bay of Helsinki, to the city centre, then looping around again back to Olympic Stadium. Despite my never being a runner, the abstinence from cycling since the start of our Euro trip, my runs with Olaf in Norway, and seeing the marathon here has given me stupid thoughts concerning the Niagara Marathon in October 2012... 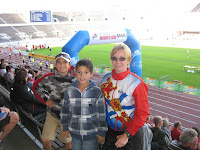 We went to Olympic Stadium to catch the finish. Great atmosphere of the stands full and cheering all the finishers. The best was when the 6th finisher did a front roll across the line - the boys loved that and want to do a front tuck when they finish their next running race!
Check out this FINNish line battle for silver in the women's race!