Yesterday we went to a lot of museums. First we took the transit downtown and went to an information center where we bought Oslo passes for 2 days 1 day costs 100 kroner ($20 Cad) and two days is only 20 kroner more for kids (220/340 for adults). On the first day after the information center we took the bus to Bygdoy and went to the Folk museum, the Kon-tiki museum the Fram museum and then the Maritime museum. Then we took the ferry across to the other side (because public transit is included). Then we walked to the palace to watch the changing of the guard and we also had lunch in a shady spot at the bottom of the hill.


Pictures from our museum tour! 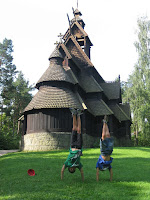 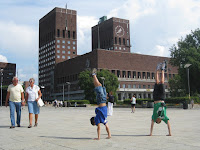 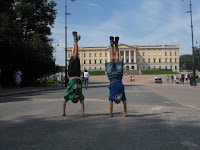 Handstands at the folk museum outside the stave church which is from the 1200s, the city hall where the Nobel Peace Prize is given, and the royal palace. 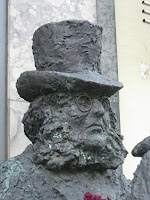 Then since it was on our way we went to the new 2006 Ibsen museum where the made a replica (and used some real pieces of his house) of his apartment. Some things we learned about him were that he was really strict on time every day he would stop by the university and check his watch with the clock there. His schedule was this: he had a 1 and a half hour bath,work from 9 till 11 thirty,then walked to the Grand Cafe for German beer and reading the newspaper, then back writing for 5 hours, and another bath. He had a couch in his office so sometimes he would have a nap but if his wife heard him snoring she would come in and take the blanket. Ibsen has a portrait of another playwright who they each do not like the other behind his back when he was writing for inspiration. Daddy would have a whole row of portraits some days! 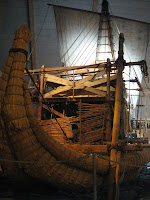 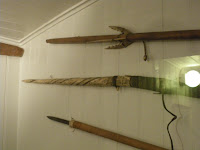 On the left is the Ra 2 at the Kon-tiki but they also had the original Kon-tiki raft that is made of balsa wood. On the right is a picture of a harpoon made from a Narwal tusk at the Fram museum. 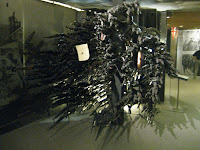 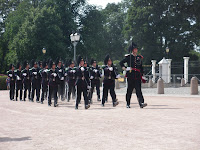 At the resistance museum the first thing you see when you go is is this huge sculpture made of guns in the Nazi symbol and the last thing you see is the Germans surrendering. On the left is the changing of the guard at the royal palace. 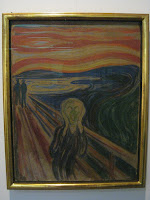 Here is a picture of the scream I took at the Munch museum the painting was stolen for a few months before it was found a little while ago. Olaf said that the museum was given $5,000,000 for security before the painting was stolen but hadn't used it yet. So now it has bullet-proof glass over the scream and you cannot bring any bags into the museums. They also have metal detectors now in front of the ticket booth.