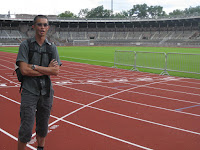 Friday afternoon while walking towards KTH to revisit my ISU past, we walked by Stockholm Stadion, site of the 1912 Olympics. While wandering around the perimeter trying to get a view of the track inside, the groundskeeper who was leaf blowing nearby must have left a gate opened. Well, when faced with something like that, there's only one thing that you can do, and that's to walk through that gate and apologize later if needed! 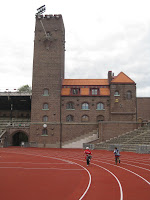 Next thing you know, we're inside the stadium wandering around, completely alone except for one runner training with her coach. Pretty soon, we were completely alone, a rather surreal feeling. Well, the only thing you can logically do in THAT situation is to run a lap with the theme from "Chariots of Fire" playing in your head. OK, that was the 1924 Games, but it's the thought that counts! So that's what we did! 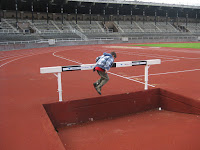 Along the way, the boys checked out the steeplechase hurdle. Man that thing is HIGH and the pit is DEEP! 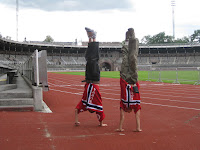