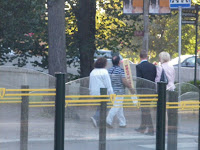 On the way home we saw a guy with a gigantic Toblerone it was 2 kilograms of Toblerone. It's a bit far away but you still can see how huge it is! Remember how Daddy was making fun of Swedish supermarkets yesterday? Well, today we went to the same market and he ended up buying chips!

Lots of Pictures from our Stockholm Adventures! 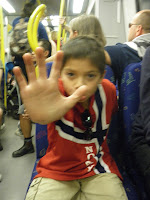 Today we got the 24 hour Metro pass we also had to pay for cards but they are reloadable so if we come to Sweden Again we can put more on them we also learned that kids are free on the weekends! we went 2 stations and then noticed that we should have only gone 1 stop so we went across and got on the Train that was there but we learned that it was the wrong train to late daddy and Jacob got off but me and mommy didn't. So we had to wait 8 minutes for the next one that went back. Because of that we missed the bus by about 20 seconds. when we did get on the bus we went to the Vasa Museum. After the Vasa we went to the city hall and got a guided tour one room was called the golden room you know why? because it was made of 23 carrot goldthere was a thin leaf of gold sandwiched between 2 pieces of glass in a mosaic. 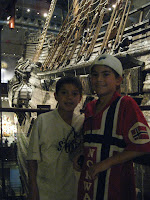 The story of the Vasa: The Vasa was built by King Gustav Adolfus the second. Because he was in a war with is cousin Sigismund Who was king of Poland about family, religion and conquest. the Vasa was contracted with 3 other ships which only 1 other being finished. Thee king had just lost 10 ships and really needed new ships The Vasa Was the First Ship that was made with 2 gun decks (you would think that if he was in a hurry for ships he would just get normal 1 deck ships). The ship was supposed to go on a 1 day sail to get soldiers to man the 64 cannons and then it was supposed to go on to Poland and stop ships from going in and out. On the first part there were about 200 passengers with the 150 crew members. The Vasa went into the harbor but after about 20 minutes the wind started to blow the Vasa tipped but righted itself once or twice but the guns were used for a royal salute so the holes were open and one time water started pouring in through the holes and the ballast went to the left side. 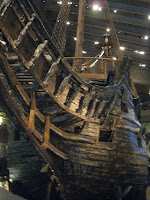 After about 20 minute more it hit the bottom and instead of blocking the polish harbour it blocked the swedish harbour (the other ship was finished 1 year later so they learned from the Vasa and this ship (called the Apple) was in the royal navy for about 30 years). some things that were wrong with the Vasa were that it was too top heavy with not enough ballast and it was too tall and thin in the other ship they used cannon balls for ballast since they are heavier than the stones that are used in the Vasa. Archaeologists think that about 30-50 people died most of the people survived because they were waving from the top desk 10 of the skeletons were in the museum. In 1961 they started to restore the Vasa. The Vasa was very well preserved because the baltic sea is not salty so there aren,t any ship worms to eat the woodthey brought it partly out of the water and then got out as much of the water and dirt as they could so they could take it to dry dock. they took all the loose pieces out, cleaned, and numbered them then they put them in a water bath untill they could restore them and soak them in polyethylene glycol they also soaked the ship in polyethylene glycol! for 19 years they sprayed it at first every 20 minutes day and night and slowly got longer and then for another 7 years they had to let it dry then they took it to the museum.

Here's a free .mp3 album you can download all about the Vasa! 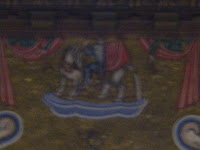 In the Gold Room of Stockholm City Hall, the mosaic maker wanted seven years to make the room but was only given two years because the opening day was already planned. This led to a big mistake. There is a headless horseman at the very roof when they ran out of room to finish the mosaic because they started from the bottom, so they just left it like that. The horseman turns out to be King Erik from the 1300s. It actually worked out well because Erik was beheaded in battle with the Danes! 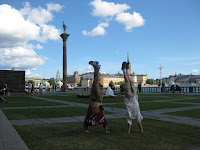 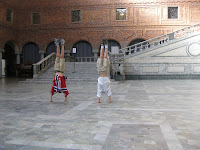 On the left we are outside City Hall doing a handstand. On the right we are in the Blue Hall inside City Hall. The architect planned it to be blue but ended up keeping it this way, but the room name was already announced so it stayed that way. He planned the stairs by making eight different wooden models and having his wife test them with big gowns and high heels to decide which is the most comfortable. They are wide and the steps are not very tall so people wouldn't fall or trip at special events like the Nobel Prize banquet. 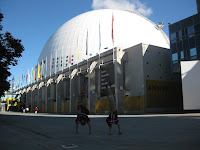 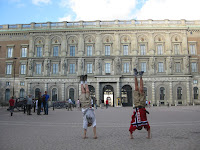 On the left is the Ericsson Globe arena, the largest spherical building in the world. If you look closely on the right there is a glass elevator that is also spherical that you can take. On the right we are at the Royal Palace. 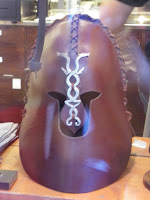 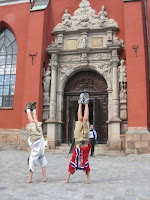 On the left is a Viking helmet, and on the right we are doing more handstands in front of St. Jacob's church!