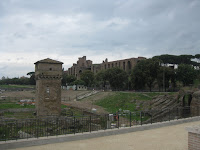 Circo Massimo (or Circus Maximus in English) is a place where the Romans had many chariot races and other contests. There are chariot races like the chariot race in the movie "Ben-Hur". One problem in that movie is that they do nine laps instead of seven. For counting the laps there is a contraption where you pull down either an egg or a dolphin after each lap. The laps are pretty big, so the stadium must have been very very big.

Run laps around this big flickr album if you can! 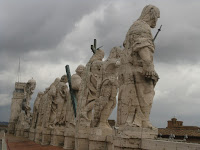 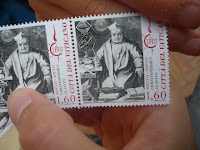 There's no end of neat stuff in Rome, or the Vatican in this case. On the left is the back view of Christ and the apostles above the entrance of St. Peter's Basilica, taken during our descent from the dome. While there, we also got some Vatican stamps and sent some postcards.
For those of you wondering, not only does the Vatican have its own post office, but countries like Canada have embassies to the Vatican. So in Rome, there's the Canadian embassy to Italy, and also the Canadian embassy to the Vatican. There's no way you can fit all the embassies into the Vatican itself!
Posted by Anonymous at 06:55