The Pantheon - home of all the gods 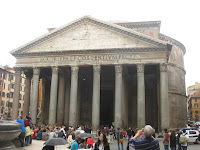 The Pantheon (Pan=all; theo=god) is a Roman temple for all of the gods. Tiberius, one of the Roman emperors and later another emperor wanted to put Jesus in the Pantheon as well as the Roman gods, but the Roman Senate did not approve of that. The Pantheon was made with 2 types of architecture mixed together, it had the columns in the front of the building and the building itself had a dome. 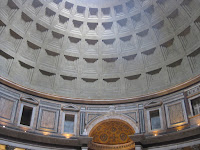 Housed in the Pantheon now is the grave of the famous painter Raphael Sanzio (right), and the first two Italian kings (along with many other people, the Pantheon is like a graveyard because all around the edge are graves). The dome is 142 ft high and 142 ft in diameter, and was the inspiration for many famous cathedral domes like St. Peter's Basilica (Michelangelo) and St. Paul's Cathedral in London. There is a hole at the very top of the dome, and the floor drains when it rains. The columns outside the Pantheon are also enormous, and the whole thing is still original from Roman times! 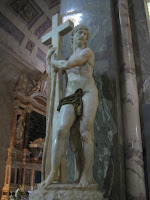 Right next to the Pantheon is a church that looks pretty plain (Daddy's colleague Laura says it's the "Roman" style) on the outside, except for another Egyptian obelisk (this time on an elephant) that the Romans took from Egypt. But inside, the church was big (no church can claim to be "really" big after seeing St. Peter's!) and featured Christ the Redeemer by Michelangelo (right).
Posted by Anonymous at 09:07