Life is Beautiful in Arezzo 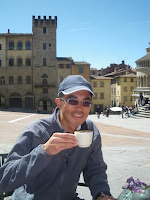 The city of Arezzo in the south east part of Tuscany is also the capital of the province of Arezzo. It is now a city of over 100,000, but the historic old part of the city is surrounded by stone walls and filled with churches, piazzas, old shops and historic buildings. 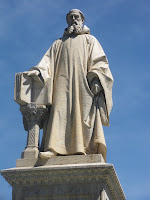 The largest piazza is the Piazza Grande and we stopped here for cafe under the arches of the Vasari loggia. We spent the afternoon wandering the narrow streets and saw the ruins of the Roman amphitheatre, the Fortezza Medicea. At the Piazza Guido Monaco is a statue of Guido Monaco who is an important music theorist and considered the father of modern musical notation. 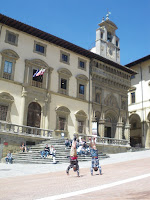 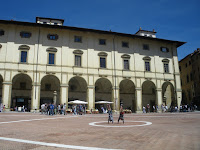 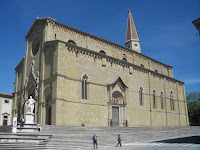 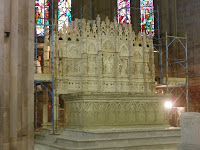 The city is filled with churches. The largest one that is considered the Cathedral of Arezzo is called the Cathedral di San Donato or Il Duomo. The first church was build on a nearby hill where the martyr Donato was beheaded in 363 A.D.. In 1203, Pope Innocent III dictated its transfer inside the city. Construction was begun in 1278 and finished only in 1511. The facade was reconstructed between 1901 and 1914. The church contains a marble alter from 1362 called the Ark of St. Donato. 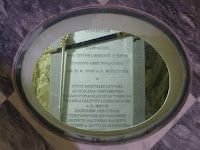 We also saw the tomb of Pope Gregory X who died in Arezzo on Jan 10, 1276. The stained glass, painted ceilings and side chapels were all very beautiful. We also saw a very ornate carousel in the Piazza Agostino and the nearby church, S. Agostino was small but very welcoming inside. 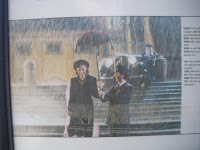 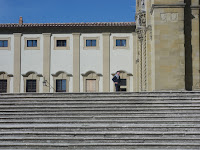 Arezzo was used as the city in Robert Begnini's 1997 movie "Life is Beautiful" (La Vita e Bella) where the family lived before being sent off to the concentration camp. There were signs at each of the about 7 locations throughout the city that were used in the making of the film.  On the left is they are supposed to be coming out of the opera, but it's actually the steps of Il Duomo on the right. If you haven't seen it, this is a movie that deals with a very difficult period of time showing how a father tried to protect his son from the horrors of the concentration camp. 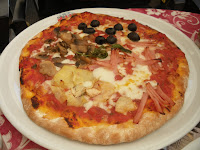 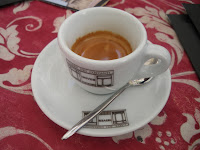 It wouldn't be Italy without real pizza and espresso, and the real thing on the right is 'molto piccolo!"

Other famous people from Arezzo include Giorgio Vasari, a painter, architect and biographer and recently, Daniele Bennati, a cyclist with the Radio Shack team. In the summer, there is an annual jousting festival where there are many people dressed in medieval costumes and live jousting competitions. 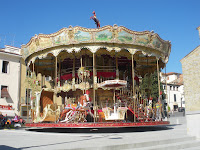 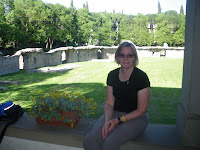 The old and very ornate carousel on the left, the ruins of the Roman amphitheatre on the right.
Posted by Debbie at 14:53