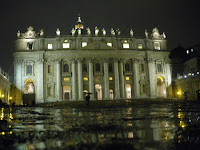 On Monday (May 8) we went to Vatican City (country #15!) and St. Peter's Basilica. We were hoping to go to the Vatican Museum, but the lineup was so long that it went along the Vatican walls almost to St. Peter's Basilica (>1 km!). Daddy took the picture here during his February visit. We walked up all the 551 steps to the top of the St. Peter's dome, designed by Michelangelo and inspired by the massive Pantheon dome built by the Romans.

From the top there was a great view of the area around (we also though we saw the CN and Eiffel towers!).
After that we went into the Basilica itself. It's massive - each of the side naves were as big as other big churches! Remember the last blog about the words and letters? Around the whole basilica there are giant mosaics of all the words that Jesus said to Peter in the bible, and the letters are 7 feet tall! The letters were black and around them there was a gold outline. 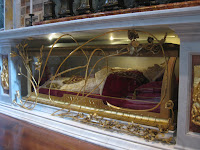 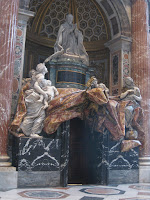 Also in the Basilica were some bodies of dead popes who had been well preserved like Pope Innocent XI and Pope John XXIII (on the left), while most of them were actually below in the crypts. 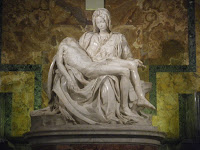 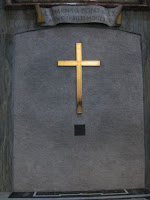 Housed in St. Peter's is the famous Pieta sculpture by Michelangelo, of Mary holding Jesus after he had been crucified. There are many other sculptures and paintings in St. Peter's but the Pieta is by far the most famous. Next to it is one door that the Pope only opens once every 25 years for one year. At Christmas Eve he ceremonially opens the door and the next he plasters it up. The next time it will be opened is Dec 24, 2024 - mark your calendars! 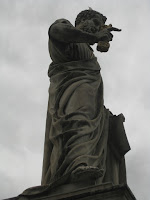 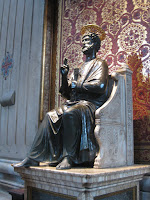 The guy this whole place is named after, St. Peter. The Basilica is built at the site where Peter was crucified by the Romans (upside down as per his wishes, as he felt he was unworthy to be crucified as Jesus was). He is most often depicted with keys, symbolizing the keys to Christianity. The statue on the right is bronze and inside the Basilica, and the right foot is constantly kissed and rubbed by pilgrims, so it's pretty shiny. 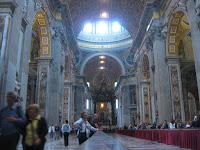 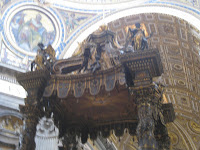 Everything is just BIG in St. Peter's Basilica. See the altar (up close on the right)? It's bronze and it's 7 stories high! 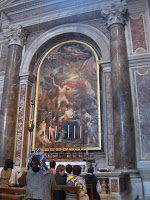 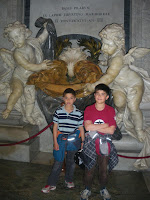 More big things at the Basilica. The left shows the shrine to the last Pope, John Paul II, who died in 2005. The painting goes almost the whole way up the whole huge wall, which is just unbelievably big. And speaking of big, check out the angels behind us!
Posted by Anonymous at 07:33