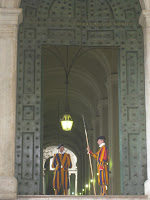 OK, St. Peter's Basilica and Square are soooo big and amazing that we need a couple of blogs. It's much easier and quicker to get into than the Vatican Museum, which is where the Sistine Chapel is. How bad is the VM lineup? At 1000h, it stretched along the Vatican walls pretty much the whole kilometre to the Piazza San Pietro! In addition to the Pope-mobile, the whole Vatican is guarded by the Swiss Guards with their very sharp and pointy pikes, not to mention their court jester outfits. 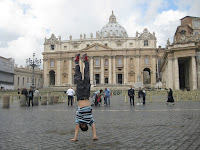 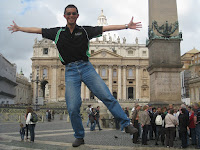 Jacob in the middle of the Piazza, me balancing on top of a concrete pylon in front of the huge obelisk in the centre of the round piazza. The piazza is surround by over a hundred columns, each adorned with prophets and saints. The Pope blesses the masses on Sundays and Wednesdays, so don't expect to get anywhere near those days! 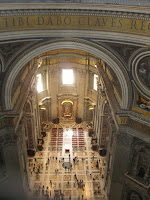 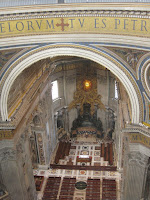 This blog, we'll focus on the dome created by, who else, Michelangelo. It was inspired by the amazing Pantheon dome (see future blog). The scale of things in the Basilica is really, really mind-boggling. These photos are from the base of the dome looking down into the church to the smaller side naves, each of which are bigger than all but the biggest cathedrals in the world! Zach will tell you how what and how big those letters you see are in the next blog - give it a good guess in the meantime! 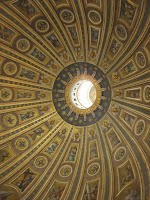 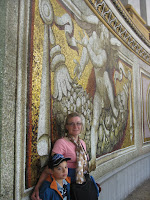 Again at the base of the dome itself. It's all mosaic tiles on the whole dome! 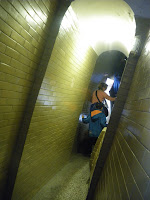 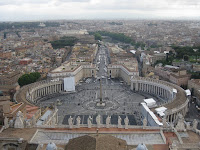 From the base of the dome, it's another 300+ steps to the top. We're not holding the camera at an angle on the left - the interior of the dome is on our right and it gets really slanted and tricky to walk inside! Once at the top, you get a pretty amazing view of all of Rome, including the Piazza below where the people are just itty-bitty-specks.
Posted by Unknown at 09:22