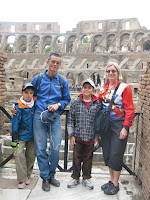 After Tuscany, we spent a few days in Rome before continuing to the Netherlands. On Sunday (May 6) we went to the Collosseo. The Colloseo was built on top of the place where Emperor Nero's house once was, but they built it over top to show how much they disliked Nero. We got our tickets at the Palatine Hill because there was the shortest (zero) lineup there. The ticket was combined for the Colloseo (or Colosseum in English), the Foro (Forum) and Palatino Hill (Palatine Hill). So when we got to the Colloseo we just jumped through the huge long lineup getting tickets there and went straight in!
Roman Holiday! 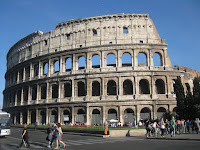 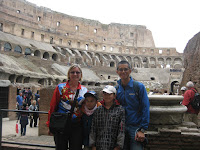 About 50,000 people could sit in the Colloseo. All 50,000 seats could be filled in less than 15 minutes by the 80 entry ways. There's the postcard photo attempt on the left, and us inside on the south end on the right. 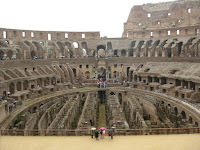 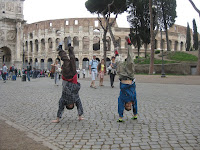 The Emperor had private seats and entry all for himself on the north end on the ground floor (right side of left photo). The nine Vestal Virgins had seats directly opposite on the south. The entry was free but to get in you had to have a ticket, which was a piece of clay with your seat number on it. There's a couple of circus performers on the right. 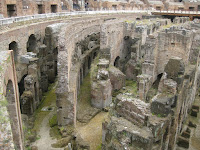 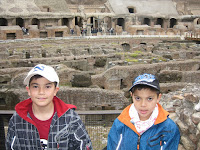 The official name of the Colloseo was actually the Flavian Amphitheatre, as they were the emperors that built it. What you see here are the underground "backstage." This is where all the prisoners, wild animals, gladiators, and stage sets would be. The actual stage is on top in line with the ground floor of spectators. It was a wood floor with nine inches of sand on top (sand is "arena" in Latin, which is where we get that word from). The performers would be hoisted up to the arena with trap doors and elevators. 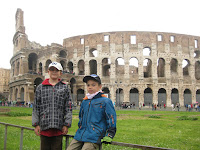 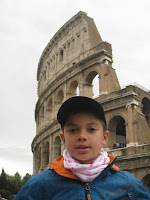 The actual show is pretty gruesome. Prisoners, slaves, and others would be killed by wild animals from all over the empire, or else forced to dress up as famous people from history or mythology and killed. Then the animals would also be killed by hunters or gladiators, and of course then there's the gladiator battles themselves. Makes hockey seem tame!
Posted by Anonymous at 08:24