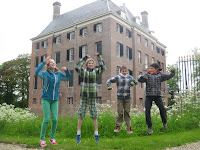 Mother's Day, Eric and Astrid's (kids Dorien and Jacco) and us got together for a lunch at their place and then took an afternoon trip 40 km south to the town of Amerongen to visit their Kasteel (castle). It was a really cool old house from the 17th century, and especially the way it was presented. 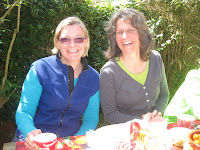 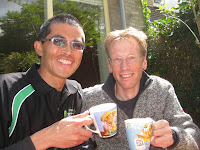 They'll be featuring on many of our blogs, so some introductions are in order. I first met Eric and Astrid a few months before I met Debbie in 1996. They moved to spend a year for Eric to do research at York University during his Ph.D., and we were introduced via Hein Daanen, who was at DCIEM (where I did my Ph.D.) as a visiting scientist and who worked at TNO with Eric. One of Eric's very first tasks in Canada was to serve as pannekoeken (pancake) chef extraordinaire at a party at my place! Anyway, over many outings, movie nights (I think we went to about 100 movies together at the Bloor Cinemas), Heavenly Hash ice cream, and roller blading sessions, we've somehow still remained friends! 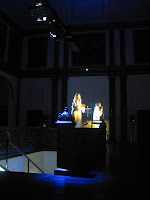 Onto the Kasteel. They really had a unique way of presenting the history of the house in a way I'd never imagined before. Rather than normal exhibits or even video displays, the entire mansion was running a movie set as one day in the life of the castle, when the mistress receives an urgent letter that the husband was returning that night with major political dignitaries for a banquet. Thus, we're taken into the life of the castle's many servants as they prepare over the course of the day in 1680. It wasn't even just a "factual" documentary, but a movie plot line with internal intrigue, scandals, etc. The story was projected over 20+ huge screens throughout the different rooms, with multiple plot lines. Really fascinating! 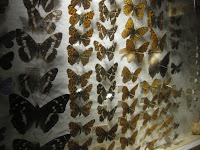 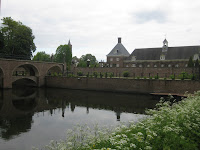 Of course, the tradeoff for the unique AV presentation was that most of the rooms were near pitch-black, so it's not the place to go if you want to open cupboards and peer in. However, there were a few rooms not used for the AV where you can see the house collections well, such as the butterfly displays, animal heads, pianos, and family portraits. You can't see from the first picture of the kids airborne, but the castle is surrounded by a moat seen here on the right picture. 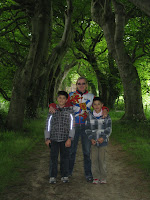 Another cool "Lord of the Rings" scene!
Posted by Unknown at 22:30