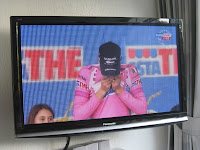 This year Ryder Hesjedal a Canadian cyclist from Victoria, British Columbia won the Giro d'Italia! We were watching the last race today and it was a time trial which Ryder is really good at! Ryder is the first Canadian to win a big race like this, he only beat Joaquin Rodriguez from Spain after 3 weeks and 3,500 km of racing by 16 seconds! Ryder gained 47 seconds on Rodriguez who is a bad time trialist (But still faster that dad by a few light years!). 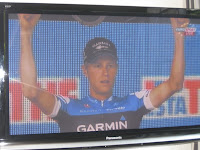 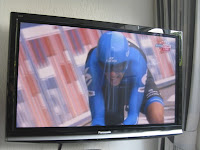 Dad's friend Rich Pestes from Pez was actually at the finish of the race (Rich is also from British Columbia but from Vancouver instead of Victoria). We think we saw a Pez jersey amongst the fans. Daddy's joining Rich and the rest of the Pez crew for a 10th anniversary week of cycling next week up many of the same big climbs raced the past week!
Posted by Anonymous at 18:57