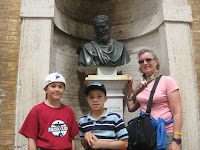 Michelangelo di Lodovico Buonarroti Simoni was born in the village of Caprese, Tuscany on March 6, 1475. Caprese is a small village with a population of 1600 and it was renamed Caprese Michelangelo to honor the famous artist, sculptor, architect and poet who came from there. On the left we're with Michelangelo's bust at St. Peter's Basilica in Rome, partway up his famous dome. 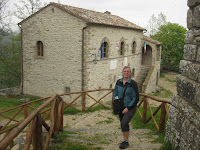 His father, originally from Florence was appointed Podesta, or judge to the towns of Caprese and Chiusa delle Verna and he spent 6 months in houses in each town. Within the "Casa del Podesta" (at right) is a re-creation of the room where he was born and the story of Michelangelo told by reproductions of paintings by other artists. You know you're famous when there are artists painting your life history! 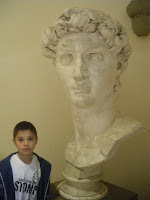 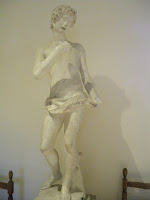 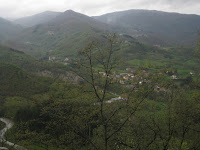 From the sculpture garden we were also treated to the breath-taking scenery of the Tuscan hills.
Posted by Debbie at 18:23