No Baloney in Bologna! 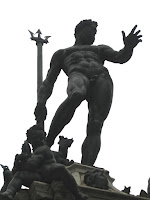 Quick dash on Sunday to Bologna to drop off Olaf at the airport for his flight home (grazie for the grand times Olaf!), giving us a couple of hours to wander around the old city of Bologna after a long drive from Chitignano. Olaf being Olaf, he guided us up and down another twisty curvy mountain road to get to Firenze. Bologna has some pretty beautiful sights and is a bit of a hidden treasure in Italy. Unfortunately, we only had time for a quick visit and most everything was also closed for Sunday (Domenico) or for siesta. 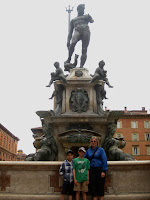 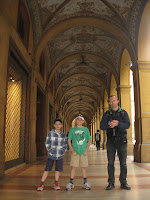 The big scene in Bologna is the Piazza Maggiore, featuring the 16thC Fontana della Nettuno (Fountain of Neptune). Another beautiful feature of Bologna, and indeed many Italian towns, are the wonderful portico  walkways in the old cities. 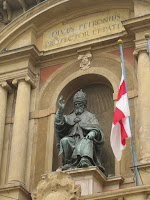 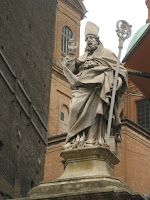 Saint Petronius (left at Piazza Maggiore, right at the two towers) is one of the main saints of the city. Bologna also houses the oldest university in Europe, founded in 1088AD! Unfortunately, the Biblioteca for the Uni was closed on Sundays, as it's supposed to be incredibly impressive and ornate. It also houses one of the very first Teatro Anatomico for the study of anatomy. Luigi Galvani, founder of bioelectricity, is also from Bologna. The Basilica San Domenico was closed for siesta, but it was built in the 13th century by San Domenico, the founder of the Dominican Friars. 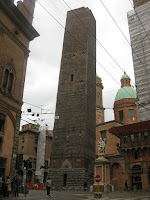 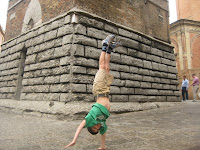 Another iconic sight in Bologna are the Two Towers, medieval towers built by wealthy families to out-compete each other. The taller one is 90 m high and there are stairs to a viewing platform all the way up. But the one next to it, shown here, is actually leaning a few degrees (just like Zach's handstand!) due to the ground beneath it settling. You can see it a bit on the left, but especially on the right with the foundation. So it's not just Pisa!
Posted by Unknown at 23:05