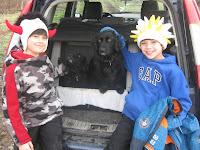 One gets the impression that there are many dogs in Trikala. They are everywhere, in the yards, fields, streets and roads. I have identified them into 4 groups: First are the loved and well cared for dogs that we see at the office. They are well -fed, groomed, vaccinated, dewormed and as you can see, they ride in style. That's Danna and Molly, who belong to Giorgos and Christina, 2 profs here. Giorgos even has a lot of Youtube videos of "ta koritsia" (The girls). 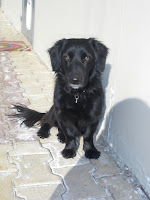 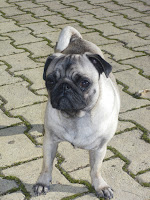 Molly on the left, and Pooka the Pug on the right, another of the dog family along with "Vavu" here at the offices. 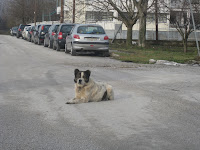 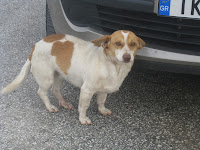 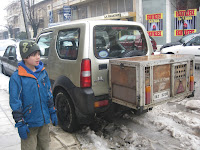 Second, there are the dogs who seem to be owned but aren't really taken care of well. There are 3 in particular we see near the office. The old fellow (white with the dark head) up above is visibly lame on the left fore leg. He will lie right out in the middle of the road sometimes and the cars just go around him. Fortunately, in that area it is only the cars going to the school and our university offices.  Also, the hunters put these wooden boxes on the backs of their cars for their dogs - they are well ventilated but unfortunately the exhaust is also able to come right into the box. 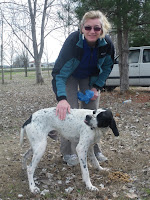 Then there are the strays. There are many stray cats as well and you see them climbing into the garbage containers and foraging. There are stray dogs in the fields on the way to the university. They chase cars and bikes but haven't bothered me yet while walking. I did stop  once to get a stick when they were looking a little menacing. There is also a stray (on the left here) who has started hanging around the University cafeteria - he's no dummy! He is a black and white hound-type with a collar mark on his neck, so we assume he has been just dumped off. He is shy but very friendly. He has been there a week now and already looks slightly less skinny. Last Friday, he was ravenous and people were bringing him out food. Since then we have bought him a dish and some dog food, but are feeling bad that he is so thin and it has been so cold and wet. We aren't sure where he sleeps. I saw him chasing chickens about a week ago, so at least feeding him, may keep him from getting shot for chasing chickens. There is some sort of shelter here - I haven't got up the nerve to go yet. 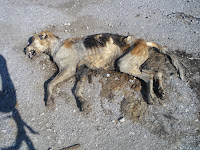 Finally, since there are so many animals running loose, there are also many dogs that are hit by cars and left on the road dead. If I go for a bike ride, it would be unusual NOT to see a dead animal somewhere along the road. There is no service/society that will remove the dead bodies so they just lay there. I will spare you the most graphic picture. If people would only neuter their pets and keep them fenced or confined, many of these sad endings would be avoided.
Posted by Debbie at 13:15