The New Talent on the Lecture Circuit!

This week I had the honour of being asked to give a talk to the University group here. It was a general talk on Veterinary Medicine with a discussion of obesity and links between it and other diseases in dogs and aslo some similarities between dogs and humans. I was a little nervous, not being used to speaking to a group as Stephen does. I had to learn how to use Powerpoint to prepare the talk. Zachary said, "That's easy Mom, we can help you." I have learned enough Greek to be able to say a few sentences in Greek at the beginning. The talk was attended by about 12 people and was well received with lots of questions and comments afterwards. Now I have to prepare for a high school talk that I have been asked to give next week.

(SC note: Having sat through far too many boring lectures in my life, I can definitely tell you that Debbie did a fabulous talk! It catered to the crowd perfectly, with a bit of background, some good science, and some lighter stuff. No matter how many talks I give, I still get a bit nervous before each one, but I always find that, once I get talking about things, I'm just too involved to be nervous and don't really worry about who or where I'm speaking!) 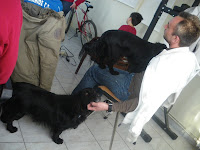 Molly and Danna definitely fall into the first category of Debbie's classification of Greek dogs - the loved and adored category!
Posted by Debbie at 10:13