It's All Greek to Me! 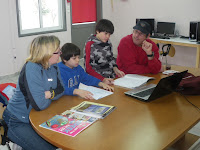 We were a bit lax at the start, but the past couple of weeks we've really tried to immerse ourselves into learning Greek. Since our arrival, we've been playing the 30x30 min Pimsleur audio course during breakfast, mumbling Greek while trying to chew muesli at the same time! The past two weeks, our friend Nick Denos from church has started giving us lessons both Tuesday and Thursday mornings. In other words, we're trying to bombard ourselves with the language in as many modes as possible. 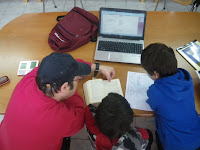 This week, we've also taken to watching the local History Channel, where they have shows in English (and also French/German, etc.) but subtitles in Greek. It's a good way to recognize words and put them into context! This past week, the boys greatly enjoyed going through the food flyer from Lidl and figuring out the names for different foods: manitaria (mushrooms), fraooles (strawberries), myla kokkina (red apples), portokala (oranges), etc.
Further, Debbie and I have been trying to deconstruct the Greek language's basic grammar and vocabulary, including trying to learn the typical 100 most common/frequent words used in many spoken languages. Surprisingly, I've already managed to learn the large majority of those 100 words over the past couple of weeks. It's neat - with those 100 common words and basic conjugations, you can actually start making decent conversation, adding vocabulary as you go.
At the same time, we're taking our language training wheels off and trying to communicate in Greek whenever we can, whether myself with Andreas and Petros, or around town. It worked well yesterday in Vasilitsa, where I was able to rent snowboards (saying "I want to rent", sizes, etc.) all in Greek. It's fun to communicate like Tarzan! I did that during my Kori ride with a villager on a moped partway up the climb, and think I did OK - "to thromos eeneh poli aPOtomo alla poli omorpho!" (the road is very steep but very beautiful!).
Posted by Unknown at 16:34