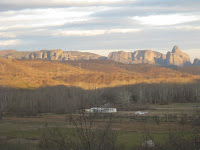 Meteora is about 30 km north of Trikala, and it literally means "hovering in the air". These gigantic sandstone rock are a rare geological phenomenon and a mystery of nature. The monasteries that have been built on them are a marvel of man and the are is classed as a Unesco World Heritage Site. 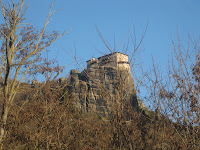 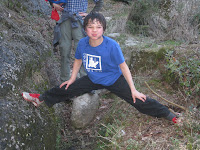 The area was settled by monks who lived in caves in the 11th Century, but during the Turkish occupation, they gradually moved upwards until they were perched on the top of these giant rocks. They were originally built by bringing up supplies by ladder and basket, but now there are roads, steps or paths to them. Apparently one nervous pilgrim asked the monk, as he was getting into the basket, if they replaced the rope and the monk replied in the affirmative that they replaced it whenever it broke. I'm sure that put the pilgrim's mind at ease.....NOT! 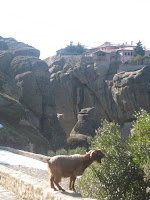 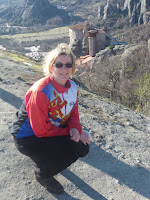 During the Turkish occupation, the monasteries kept alive the Hellenic culture and tradition and were the religious centers. As well as the religious men, there were also philosophers, poets, painters and thinkers in the monasteries.  Today there are 6 remaining monasteries and it is the second greatest collection of Eastern Orthodox monasteries in Greece next to Mount Athos. 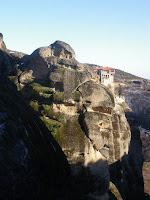 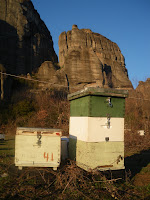 Agia Triada (Holy Trinity) was founded by the monk Demetrius in the 5th century. It was used in the filming of the James Bond movie "For Your Eyes Only." Another was used in the filming of "Tintin and the Golden Fleece. There are 140 stone steps to reach the monastery. The day we were there, the monastery was closed but we saw lots of goats climbing about on the high rocks. The monks today have steel cables and gondolas for taking in supplies, but there are still some ropes and baskets visible on some of the monasteries.

Varlaam Monastery was build in 1517 by Theophanis and Nektarios Asparadas from Ioannina. Agios Nikolaos Anapafsas was build in the 16th century by Dionysius. Roussanou Monastery was built in 15445 by brothers Joasaph and Maximus from Epirus on the ruins of an even older church and you reach it by crossing a small bridge over a deep cleft between the rocks. The only convent among the six is Agios Stephanos; the monastery to St. Stephen. it has a beautiful view over Kalambaka plain and the city of Kalambaka (Turkish for "beautiful fortress") It was build in 1798 at the site of an older church. There was serious damage by the during WWII when there were thought to be insurgents hiding there. Indeed much of the city of Kalambaka was destroyed, so it is a relatively new city now. 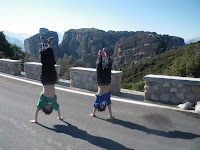 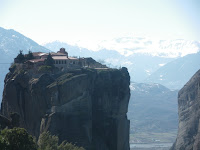 The best known monastery on the highest rock is Megalo Meteora (Metamorphosis). Work on it was begun before 1382 by Athanasios the Meteorite. The Serbian Emperor Symeon Uros gave much of his wealth to the monastery so it became the richest and most powerful. It has a 12m high, 12 sided dome in the katholikon (temple) and the most beautiful was paintings. All the monasteries have wall paintings and frescoes by famous Greek and Byzantine painters, icons and ancient manuscripts.

Meteora is a great attraction today for both religious pilgrims and hikers and climbers alike.
Posted by Debbie at 11:48