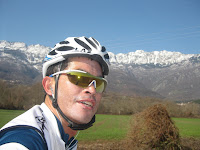 Cycling here in Trikala reminds me somewhat of Ljubljana, Slovenia, where I spent two months during my last sabbatical in 2004/5. In both places, you can go in all directions for many kms on flat roads dotted with small villages. But also, both places are ringed with mountains for me to get my climbing fix. Today's ride took me up to the mountain village of Kori, or at least most of the way there.
Fun around Trikala Flickr 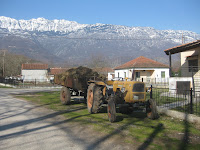 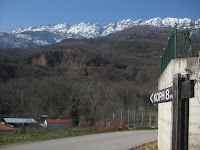 Trikala is a rural town, no doubt about it. Throughout all the small villages throughout the area, there are no end of farm tractors everywhere. I've started taking pictures of tractors for fun (see future blog). The one on the left is in the village of Dendrochori, just before the first village in the foothills. The road up to Kori first goes through the village of Gorgorgiri, and it's a bit of a slap in the face right away, to the tune of 10% first bit up to the edge of the village square, and then kicking up to 15-19% through the village proper before the real climbing begins from this "8 km to go" sign.  Yep, we're going up there! 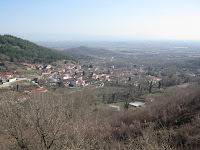 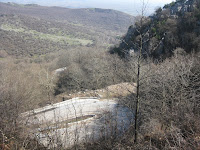 I've gone less than 1 km distance before taking this left picture of Gorgorgiri, and it's already WAY down in the distance. The road has switchbacks just piled one of top of another nonstop, as you can see on the right. Even then, the straightaways rarely ever dip below 10% grade, and the switchbacks are just ridiculous - even the outside path, where it's shallowest, are usually at 14-16%! 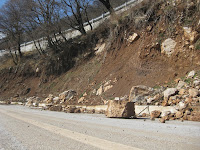 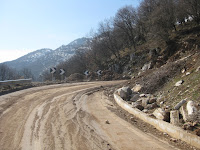 The rockslides on the left are pretty common the whole way up the climb, and certainly give you incentive to keep moving and stay away from the edges! About halfway up, wild dogs strolled along the road in front of me, eyeing me the way they'd eye a big juicy slab of steak. There was no way I was ever going to outrun these pups out here, but luckily they probably thought I was too skinny to bother with. Thank goodness I didn't indulge in those celery pies in Metsovo... 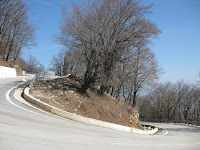 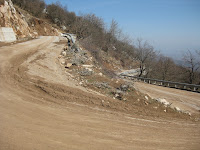 The switchbacks just keep coming every couple hundred metres, and they are NOT optical illusions -  I set the camera as horizontal as possible! And if well-paved switchbacks are too boring for you, the one on the right, with washed-out dirt everywhere, makes for some excitement both going up and especially coming back down! Good thing for cyclocross skills! 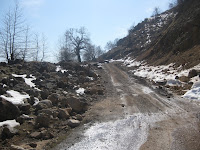 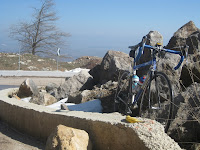 About 6.5 km and 700 m elevation gain, the pavers evidently thought that the villagers wouldn't really notice if they didn't bother paving the rest of the way up! There's no other way down the other side of the mountain, so I called it a day and descended. Apparently, the banana snack filled me up enough that the wild dogs thought I'd make a good meal after all, and it was rather entertaining descending a steep and curvy descent with two wild dogs trying to maul me!
Posted by Unknown at 11:32