Tuesday evening, Hunter's dad and I took advantage of the nice evening by taking a drive along the famous Blue Ridge Parkway. It really is an astoundingly beautiful drive. It's along the Blue Ridge mountains, part of the larger Appalachians range running 700+ km from North Carolina through Virginia. 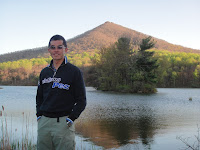 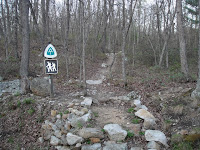 Bedford pretty much sits at the base of the Blue Ridge, with the two prominent "Peaks of Otter" on the horizon from town. On the left I'm at the Peaks of Otter resort atop the parkway, with Sharp Top behind me. Love the colours right now running up the mountain, with the top almost looking purple. On the right we pass by the world famous Appalachian Trail, which extends from Georgia all the way up to Maine. One of my favourite writers, Bill Bryson, chronicled his adventures hiking the entire trail in his book "A Walk in the Woods." 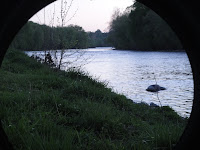 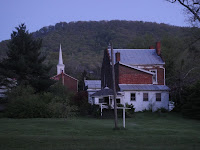 Our target with the tiny village of Buchanan (pronounced Buck-Cannon, here on the right) on the other side of the Parkway. Hunter used to work for a dolomite mine located right next to the village, and we walked along the James River (left) where he often went for hikes during lunch hours. This shot on the left is one of his favourite spots in the country, as he often expects Tom Sawyer to be paddling down. I shot this with a tire swing as a frame. Both diners in town were closed and so was the Peaks resort restaurant by the time we got back there at 8:30pm. Given that Greeks don't even consider going out for dinner until 9:30pm, that came as a complete culture shock! We ended up going to the Liberty Station restaurant (lots of railroads in the region for freight and especially coal), where I had a real North American hamburger for the first time in about a year! 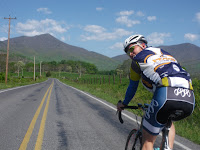 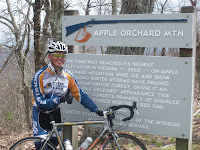 Wednesday, Hunter and I tackled the Blue Ridge by bike, definitely the hardest ride I've done the entire sabbatical. We did the steep climb straight up the "Peaks of Otter" in between Sharp and Flat Top, then continued the steady climb up to the Cold War era radar station (3950 ft, highest point on the right!), before the fun 20 km descent down Thunder Ridge and the final 40 km of rolling hills to Bedford. The BR is really incredible - no advertising or trucks allowed and impeccably paved, so there were barely any cars and they were all tourists. 87 km and nearly 1800 m of climbing, plus somehow the entire loop featured a raging headwind, such that I had to pedal hard the entire long descent just to keep momentum!
Posted by Unknown at 13:31