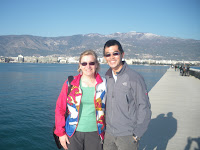 A few weeks ago, we took a day trip to the mountain village of Makrinitsa and the city of Volos. Volos is a city of approximately 140,000, located on the east coast of Greece bordering the Aegean. It sits at the foot of Mount Pelios (or Pelion), which is known at the Land of the Centaurs. It is the main home of the University of Thessaly and the third largest port in Greece. The port has connections to Europe, Middle East and Asia and also many of the local islands. 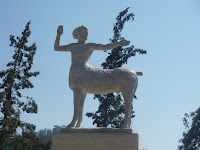 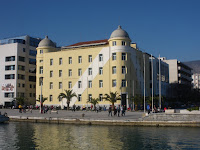 Centaur statue on the road up to Makrinitsa on the left, and the very nice main U. Thessaly building right on the main harbour front. The Uni is divided amongst Volos, Karditsa, Larissa, and us in Trikala. Obviously, this is where the top admin hang out, not in Trikala!
There are many new building in Volos since a massive earthquake in 1955 destroyed many buildings. Also, in 2006 there was severe floods in Volos. We walked along the pier and saw the rowing team practicing - apparently, Volos has a good rowing team but is usually beaten by that of Ioannina. 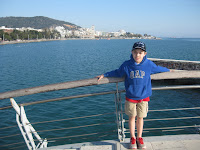 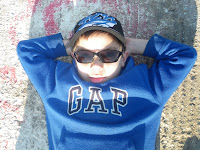 One famous person who came from Volos is the composer Vangelis who wrote the music for the movies Chariots of Fire and Blade Runner, among many others. 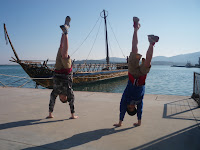 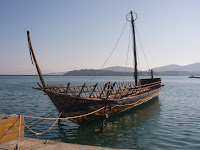 In the harbour, was a replica of the Argos, which was the boat that Jason and the Argonauts took when they went out to find the Golden Fleece. 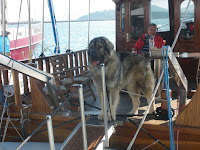 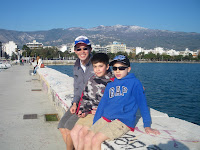 One of the main attractions in Volos is the nice pedestrian harbour front, with lots of cafes/bars and boats from many parts of Europe lined up along the dock. The protected pier is also very long and a nice place for a stroll, where the boys are on the right.
Posted by Debbie at 12:21