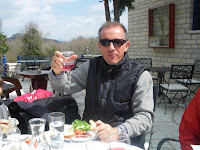 This past weekend was really special. I got the chance to reconnect with my former SFU-Igor lab mate Thanasis Passias after 18 years! Thanasis defended his Ph.D. a week after my M.Sc. defence in December 1993, and we haven't seen each other since then except for one evening in Napflio last July at the opening cruise of ICEE. He returned to Greece for military service, and now runs a successful family business distributing food supplies to restaurants in the Ioannina area of northern Greece. 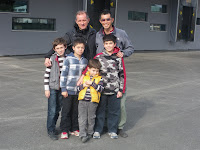 We had talked in Napflio about getting together when we came back to Greece on the sabbatical, but I never remembered where he lived. So it was somewhat of a shock to find out that, last time in Ioannina 5 weeks back, we walked by about a block from his house. That would have been a shock to bump into each other on the streets!

We had a fabulous weekend catching up together and reflecting on life and family. Also got to meet many of his family, as it's very much the stereotype close-knit Greek family with members wandering in and out of the house throughout the day! His mother claims to remember me from a picture she has of our SFU lab together somewhere. 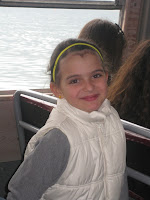 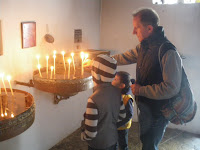 His father Christos and sister Maria (who lives in the adjoining house) all co-run the company, and we got to meet Maria's daughter Kalina, who Debbie and I just adored because she is so incredibly expressive - redefining the term "body language." When I ask her "Istay kala (are you well?), it's not just a simple verbal "Kala," but an entire head-eyes-face-verbal "Kala!" On the right are his boys Christos and Nicolai. 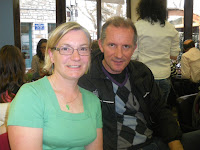 It's also interesting the different family dynamic. With Thanasis's family, the family itself is paramount, and as his wife Kirima says, "when you poke one you poke them all." There's a level of closeness that's completely different from the N. American idea of independence and self-reliance, of leaving home and somewhat forgetting the past and severing the cord. And the cycle of life is also interesting. Thanasis and his friend and neighbour Yiannis grew up being childhood playmates on the streets outside. Now both of them live in their childhood homes and their kids are now playmates on the streets outside! I enjoyed two nights of sitting outside with the neighbours watching the kids play and butchering my Greek with the neighbours and kids. Looking back in describing Canada to the kids, I think I confused the words for west (thee-tika) and east (ana-to-leeka) and mistakenly said that Canada was 6 HUNDRED kilometres wide instead of 6 thousand! Ah, all part of the fun of language immersion! 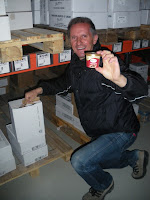 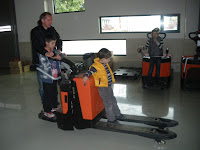 Perks of being the boss: raiding the inventory for Haagen Daaz on the left, joy-riding with the forklifts on the right!
When we toured Thanasis's company, seeing his MASSIVE (we're talking aircraft hanger sized massive) freezers (one for 0-2oC, the other for -20oC), of course my first reaction was "why don't you do some science with this thing?!" Considering Andreas and I ran a cold study in the greenhouse facilities at the Irving Centre at Acadia University, it'd be child's play to set up a hypothermia study in a tiny corner of Thanasis's warehouse! I think I got Thanasis thinking scientifically again, so who knows? 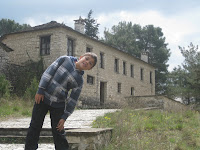 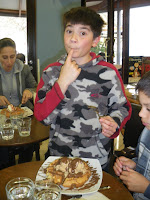 I guess I have this recurring theme of interacting with Greeks scientifically throughout my life and not truly realizing it, when you combine Thanasis, Andreas Flouris as my Ph.D. student, and of course Nota Klentrou as my colleague at Brock. Good excuse to keep practicing my Greek, especially as Andreas and his boss Yiannis has some big plans for new labs and such.
Posted by Unknown at 13:16