The Most Famous Rock 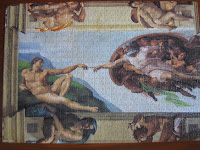 Yesterday as we were heading out for the east coast of Italy to visit the beaches and the coastal towns, we found a real treasure. Passing through the village of Chiusi della Verna, 10 km away from our villa, we found that this was the village where Michelangelo spent time as he was growing up. 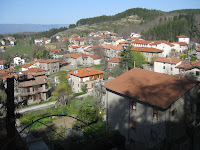 La Verna is famous as a Franciscan sanctuary. The mountain was given to St. Francis in 1213 by Count Orlando Cattani Casentino. It was the site of the miracle of the stigmata in 1224 were Francis sees a vision of an angel being crucified and afterwards receives the marks of the crucifixion on his body.  The mountain has a lovely forest of maples, ashes, elms and beeches. 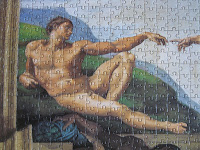 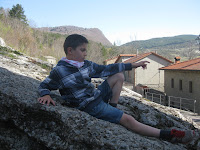 The father of Michelangelo had a house in this village and the young Michelangelo spent much time here when he was growing up. We saw the actual rock that inspired him when he painted the Creation of Adam on the roof of the Sistine Chapel and the views that he used as backdrops in some of his other famous paintings. For sheer unexpectedness, this has to rank as the coolest surprise moment of our trip to date! The birthplace of Michelangelo is Caprese Michelangelo (more about that in another blog).
Posted by Debbie at 11:22