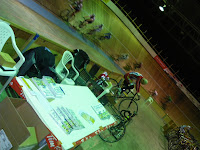 So the whole purpose of heading back to Canada, aside from getting my fill of all-you-can-eat sushi (thanks Glenn!) was to promote Cutting-Edge Cycling and get the copies out to cyclists. It was a busy but fun time, as I had arranged a stash of book events for the week back. Spent most of the weekend at Paris-Ancaster, a big 1500 rider mass road/dirt/mud 60 km ride that I've done a number of times. 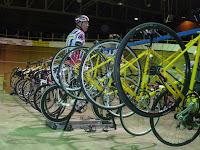 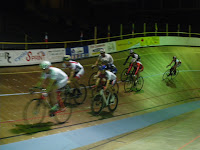 Saturday evening (April 14), I also booted over to London and the Forest City Velodrome, currently one of only two covered cycling tracks in Canada (the other one being in my hometown of Burnaby, BC, but well after I had left). I've only ridden on the track once, and that was in 2005 down in Dunedin in my last sabbatical. 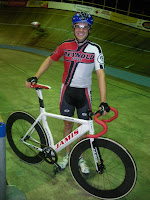 One of the greatest things about cycling are the people you meet through the sport. It's even cooler when there's a scientific connection, as I've had the chance to ride with fellow cyclist-scientists all around the world and network that way. I've known Geoff Power (right) since 2005 or so, when he was in his late B.Sc. stages back at his home in St. John's, NL and Memorial U, when we've done some nice rides and breakfasts out to Cape Spear. Geoff is now finishing his Ph.D. at U. Western Ontario, and it's great to see his development. Besides becoming a super-fast cyclist, it's great to see his cool research development as a scientist. 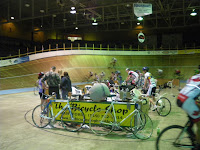 FCV is awesome for the community, and track is a great place to learn racing. The group does a great job of getting riders of all levels involved, and the track is dizzyingly short at only 138 m, meaning that a lap is about 15 s or less! It was especially cool seeing all the young teenaged cyclists really getting into the sport. Thanks to the 2015 PanAm Games being in Toronto, a new track will be built in Milton, so that might be my next big thing?
Posted by Unknown at 00:05