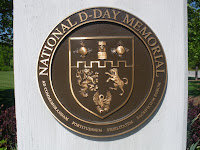 The National D-Day Memorial is located here in Bedford, VA. It was awarded to Bedford by Congress because the town suffered the highest per-capita losses on D-Day (19 Bedford soldiers out of 30 died on June 6, 1944). It's a nice bit of symmetry being at Normandy in December and now here. It's located at 3 Overlord Circle (Overlord was the code name for the invasion). 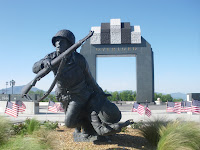 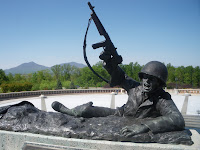 Lots of impressive and symbolic sculptures on site. In the background on the left is the victory arch, with a soldier dragging a comrade in the foreground. On the right is a soldier in the "Scaling the Wall" sculpture, with the "Peaks of Otter" mountains (Sharp Top on the left, Flat Top on the right) behind. The sculpture represents both the individual accomplishments of the US Rangers at Pont-du-Hoc, and also the symbolic scaling of Fortress Europe itself by the invasion. 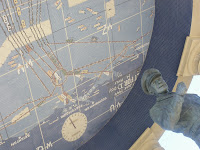 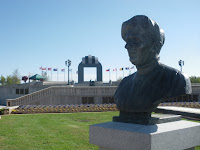 The English-style garden represents the preparation for invasion in England. The statue of Ike in the cupola has a tile mosaic of the invasion in the ceiling above. Monty's in the foreground on the right, with the arch behind. The flags represent the countries participating in Normandy, with a plaque detailing their roles below each flag. 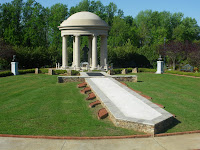 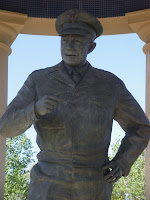 General Dwight "Ike" Eisenhower is in the cupola at the back on the left, and close-up on the right. The garden is inlaid with the sword symbol of the invasion. 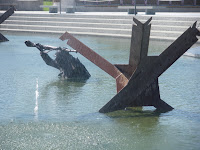 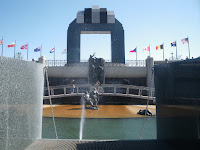 The invasion tableau. Really neat design, with waterspouts randomly firing to represent the gunfire. The iron contraptions are anti-landing craft traps, designed to impale or rip open landing craft. On the right is a symbolic view from inside a landing craft. Note the design replicating Atlantic Wall defensive bunkers that the invasion is attacking and scaling. 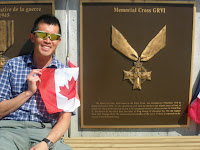 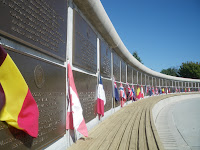 The designers have done an admirable job of aiming to register and commemorate every member of the Allied Expeditionary Force that died June 6, 1944 as part of the invasion, regardless of nationality. Overall, the design of the memorial was really quite amazing, telling the story of D-Day in both direct and symbolic representations.
Posted by Unknown at 14:10