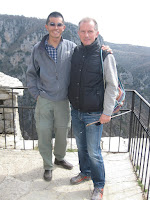 This weekend, we travelled back to Ioannina and spent the weekend with Stephen's Simon Fraser lab-mate, Thanassis and his family. Thanassis did his PhD at Simon Fraser U in Vancouver and then returned to Greece to do his army service. Now he is managing his family food supply and distribution business. He and his wife, have 2 boys aged 9 and 4 1/2.  After arriving Friday evening, we wandered along the old castle walls and saw the burial place of Ali Pasha, who was the Albanian Pasha in the area of Ioannina during the time of the Turkish occupation. More about the adventures of Ali Pasha later. 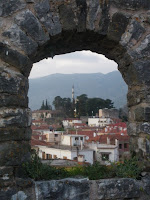 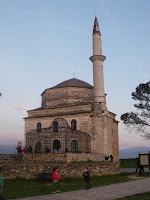 View from the castle walls to the mosque at the other end of the inner city walls on the left. Ali Pasha's tomb (minus head of course) is in that birdcage-like structure.
Saturday, we drove up into the mountains to a village called Mono-thenthri, which means one tree. It was so named because of a massive fir tree there until the 1840's. At that time, not a lot of other trees grew because there were so many goats and sheep that ate the landscape bare. In Mono-thenthri, the houses are all made of stones quarried from the local hills. The lanes are lined with tall walled fences that were designed to give the inhabitants some protection and privacy during the time they were occupied by the Turks. There were some prosperous merchants from the area who established trade schools for girls to teach sewing, weaving and other skills. There are several small hotels and restaurants there. It was a very nice village to visit and it sits near the edge of the Vikos Gorge. 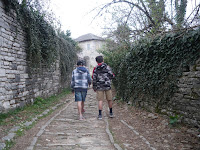 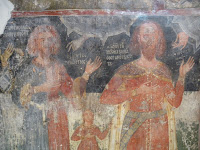 Typical high walls built during the Ottoman occupation to keep Greek locals from the prying eyes of Turkish soldiers. On the right are the paintings of the donors for Agias Paraskevi monastery at Mono-Thenthri, which was built in the 1200s!

In 1997, the Vikos Gorge was declared the deepest gorge in the world at just under 700 m from top to bottom and about 1.1 km wide. It now may have been surpassed by another gorge in Australia but it is still spectacular. There is a stone road you follow down to a monastery on the edge of the gorge. Then you can follow a narrow trail along the side of the gorge with steep walls about you and a sheer drop-off below. 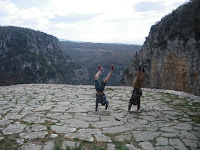 After the hair-raising gorge walk, we had a great lunch outside at a small hotel in the village with several local delicacies. There was a yogurt-cheese dip made of the whey from making feta cheese. There was also great tzatziki, flour pie, lamb chops, soulvaki, salads, and for dessert, preserved fruits and the Greek version of "impossible pie." Then we went to an indoor play place for kids where they could burn off some steam after riding in the car for a while. 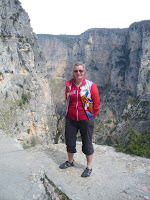 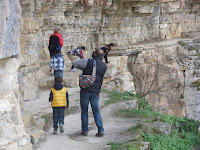 Not joking about the hair-raising steep gorge. Reminds me of Stephen manoeuvring me to the outside edge of a steep cliff before he proposed! The walk on the right is literally just carved out of the rock cliff.

Sunday afternoon, we took a little ferry boat over to the little  island (called by everyone "nisaki" - little island) which is in Lake Pamvotis right on the edge of Ioannina.  On ther island there is a monastery (sorry, no photos allowed) that was built in 1290 and is entirely painted inside. The paintings were finished in the 1400's. Some of the faces, eyes and hands were defaced by the Turks during their occupations there, but the despicable part is that most of the damage has been done during the last 50 years by people carving their names into the wall. 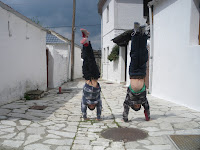 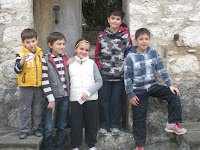 The monastery is tended by a little old Greek woman who is 95 years old and has lived there all her life. In the back of the church is a "secret school" and this is where the Orthodox priests taught the Greek language and religion and were able to keep these alive during all the years of Turkish occupation. 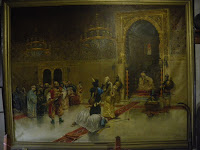 Also on the island is the house where Ali Pasha came to hide when Turkish soldiers were hunting for him after the Sultan ordered his execution because he was gaining too much power. He was hidden in rooms upstairs and the soldiers came into a walkway below and shot up through the floor. After he was killed, they took him out onto the steps and beheaded him. His head was sent to the Sultan in Constantinople (see photo) and he was buried in Ioannina.

Later in the afternoon, we drove to the Greek War of Independence Museum. (www.vrellis.gr - in Greek). The museum is a wax museum and it is the vision and was entirely created by Pavlos Vrellis who was a sculptor and artist. He has built the entire museum himself - sculpted the characters, sewed the costumed, created the scenery and designed and engineered the building. the inside, is designed to be like a cave, since the original museum was in a cave. There are scenes and characters from the Greek War of Independence from the Turks - the Benefactors, Teachers of the Nations, the guerilla fighters, the leaders - Kolokotronis and Kanaris. Also some small exhibits about WWII and the Invasion of Cyprus in 1974. The museum was very well crafted and the figures very expressive and life - like. 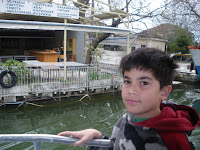 Over the weekend, we also learned a few Greek traditions. One is that the children tie a red and white cord around their wrist on the first of March and then on the first of April, they cut it off and throw it on top of a roof. It is supposed the be an offering to the swallows who are returning for them to include in the building of their nest and it is supposed to protect the wearer from the sun in the summer.

Another tradition is to take hard boiled eggs at Easter and to tap them together with your friends hard-boiled egg. The winner is the one whose egg doesn't crack. The goes on until there is only one winner. Don't tell our Greek friends, but the boys have secret ammunition - carved and painted wooden eggs. 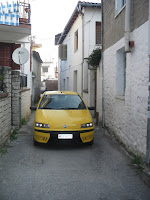 We also visited Thanassis' warehouse. They have just recently finished a new warehouse that is attached to the older one. It is a very impressive new building. There are 2 huge refrigerated sections at 0-2C and minus 20C. The boys got to try out the forklifts and every one had taste of Hagen Daaz. No photoshop on the right, living inside a walled fortress means the roads are even narrower than you can possibly imagine! 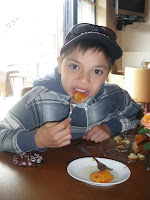 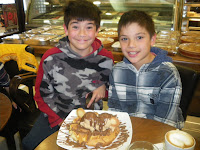 We finished off the afternoon/evening with coffee and waffles and more ice cream, then Pita Gyros. Who says you can't flip dessert and dinner?
Posted by Debbie at 13:10