Mount Olympus - Home of the gods 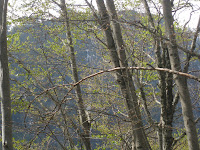 Monday we took a drive to Mount Olympus which is the highest mountain in Greece.  It is a multi-peaked mountain with the highest points being Mytikas, Skolio and Stefani at heights of 2918m, 2912m and 2909m, respectively.  It is also the second highest mountain in the Balkans. The diameter is approximately  25km and it is an independent massif (not part of any mountain chain) covering an area of 500 km2. It is located in the north - east corner of Thessaly. 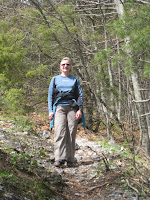 In ancient times, Mount Olympus was considered to by the home of the twelve ancient Greek gods. Homer describes them as living in "the mysterious folds of Olympus." Mytikas was called the Pantheon or meeting place. The throne of Zeus was on the north-east face of Stefani. Artefacts have been found near Olympus dating back to the Iron Age. One of the small towns nearby, Dion, has archeological sites where artefacts  from 500 B.C. to 500 A.D. have been   found representing Macedonian, Greek and Roman eras. 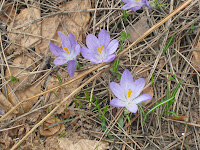 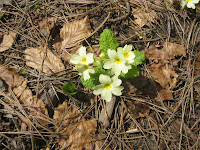 In more recent history, the armatoli hid here during the War of Greek Independence.  In 1941, battles were fought here between the Germans and Greeks, New Zealanders and Australians and the Greek Resistance had outposts here. Since the 1950's it has been the site of mountain adventures and some tragedies. 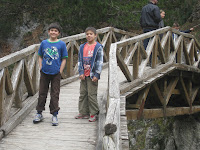 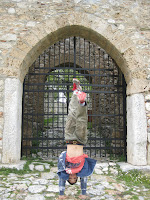 In 1981m Mount Olympus was declared a "Biosphere Reserve" and over 150,000 people visit it annually (although likely much higher since there is only one information check point and different points to enter) and approximately 10,000 people climb to the summit; 70% of them are international visitors. 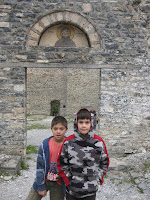 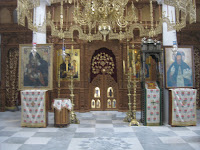 We drove approximately 1/3 of the way up the mountain and hiked on a nice forested trail from elevation 1050m to 1450m. We had a few glimpses to the top of the mountain but not as many as we hoped for. Then we drove to Prioni, which is a trailhead are with a small restaurant at the end of the mountain road. You can hike 11km from the town of Litochoro or you can drive to Prioni and start from there. 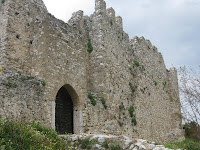 On the way back down we stopped at the Old Monastery of Saint Dionysis. It was built in the 1500's and suffered many things but the worst was when it was completely destroyed in WWII. It is slowly being rebuild now. 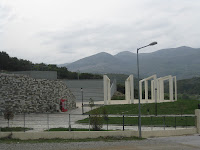 On our drive back we stopped at Platemon castle which is one of the best preserved castles in Greece but it was closed. We also stopped at the Theater of Tempi which had a historical sign but was actually a modern theater. It is nestled between Mount Olympus and Mount Kissavos and is a 600 seat outdoor theater with amazing views. It was built to show the plays of Aeschylus (ca 525B.C.) who is considered the "father of ancient Greek tragedy." It is believed that he wrote over 50 - 90 plays but only 7 of them still exist.
Posted by Debbie at 14:50