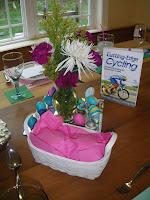 Virginia is south of the Mason-Dixon line, which means down-home southern hospitality, lots of greenery and Civil War history. I'm staying with Hunter's dad (also Hunter) in their 1779 stately home - very cool! Hunter senior (he's actually  Hunter Jr and my friend Hunter is Hunter III) is really terrific host and we're having a great time talking about different life experiences. Hunter's dad was director of marketing for rail and mining businesses, and just an interesting man to be with. 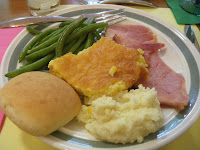 Monday night, I got to meet the whole family at Hunter's place over Easter dinner. Note the actually GOOD green beans on the plate, a real treat after 3 months of Greek cafeteria green beans! The middle was this amazing corn pudding that Kate made. At the dinner was Hunter's dad and also Kate's parents. Richard Boyd was in the US Army in the Pacific during WW2, so it was really neat hearing his stories. 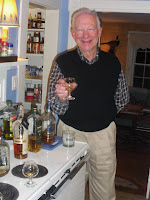 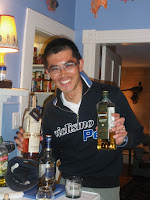 In the "I should have known better" department, Hunter's dad aspires to be a bourbon snob, so I tagged along while he educated me on the history and tasting of different bourbons. They ranged from cheap firewater moonshine level up to pretty darned expensive and nice ones, to the point that even I could tell the difference. We also tried them neat and on the rocks to figure out the different flavours. My overall pick was the Jefferson's Reserve neat, with #2 being Bushmills. Of course it all became a bit academic and irrelevant to me by the third sip once the alcohol started kicking in!

Late update: the southern hospitality does NOT seem to extend to the United Air staff at Roanoke Airport! Wow, it's one thing to just be passive and do your job, but they seemed to have perfected the art of actively neglecting you and making every simple request ("Um, here's my ID, can you find my reservation please?") seem like the most unjust and hassling demand. Incroyable!
Posted by Unknown at 13:20