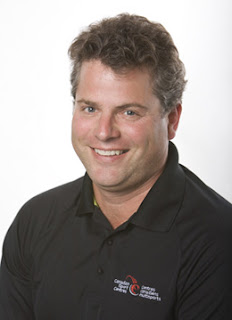 I have some very sad news. My friend and colleague Dr. Gord Sleivert passed away suddenly April 2, 2012, and I just received the press release shortly after posting the previous blog. Gord was the VP of Canadian Sport Centre Pacific in Victoria since late 2003. Prior to that, he was a faculty member at U. New Brunswick, where we had a very close and productive collaboration. Gord and I were co-applicants on our first NSERC grant from 2002-2007. Through that relationship, we've co-authored 11 papers and co-supervised numerous students. Indeed, it was Gord who got me into the field of neuromuscular physiology that I have become fairly well-known for. Chief amongst these were our papers and theses with Shawnda, Melissa, Leo, and Carla, great students and all very novel and high-impact studies. I know the impact Gord has had on the development of my students has helped to make me the scientist and mentor I am today. And in many ways, we've made each other's careers.

I have lost a friend and Canada has lost a tireless advocate for sport science and high performance sport. I hope you will join me in sparing a thought for his family.


Date: April 3, 2012
For immediate release
Victoria - It is with great regret that Canadian Sport Centre Pacific (CSC Pacific) announces the sudden passing of Dr. Gord Sleivert, Vice President of CSC Pacific, on the evening of April 2, 2012 while he was in Montreal attending meetings with Swimming Natation Canada and working with CSC Pacific staff at the 2012 Canadian Olympic and Paralympic Swimming Trials.
Gord had been with CSC Pacific since November 2003, helping establish and build the centre’s performance service team that helps power podium performances for Canadian athletes and coaches.

CSC Pacific Chair, Giuseppe Liberatore said, “CSC Pacific is deeply shocked and saddened by the sudden passing of our Vice President, Dr. Gord Sleivert.  During his time with us, Gord’s dedication to the advancement of high performance sport was felt at many levels across BC and Canada.”

Reflecting on her colleague’s enthusiasm and vision, CSC Pacific CEO, Wendy Pattenden, said, “Right up until his passing, Gord was doing what he’s always done during his eight years with CSC Pacific – tirelessly supporting athletes and coaches to win more medals for Canada.  I have lost a close friend, and our team at CSC Pacific has lost a beloved leader, a supportive mentor and an individual who had an incredible impact on our organization.”

Gord is survived by his wife Kari,and three children Benjamin (15), Brianne (15) and Lachlan (12). Our thoughts and prayers are with Gord’s family at this time.
Posted by Unknown at 11:35