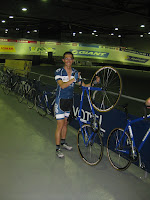 Monday May 21, a group of us at the TNO lab organized to rent an evening at the velodrome (cycling track) in Amsterdam for a "learn to ride" night. "Standard" velodromes are now 250 m (used to be 333 m), though the Forest City Velodrome in London, ON is 138 m! While all 10 of us were regular road cyclists, this would be the first time ever on a track for everyone except for my one time in New Zealand during my last sabbatical. And with the PanAm Games coming to Toronto in 2015, it's bringing a new indoor velodrome in Milton, so gotta get ready! 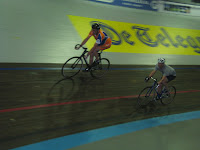 On the left, in the orange Rabobank kit, is my long-time friend and colleague Hein Daanen. The speed you have to be maintaining simply in order to stay upright in the corners are pretty phenomenal. And when you're going really fast, the centrifugal force pulling you into the turns is a pretty huge adrenalin rush! The wide blue (cote d'azur) line is the entry/exit lane, and the red and blue lines are informal "lanes." The white part up high is also part of the track! 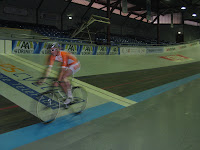 Track riding is like riding on the road, only it's not... The biggest single difference, besides the single gear, is that the bike is a "fixed gear" meaning that the chain is directly connected to the rear wheel with no ability to coast. Your speed is completely dependent on how fast you pedal, and there are no brakes. Our coach Carolien was terrific at guiding us, and by the end we were riding in pretty tight formation in a pace line. 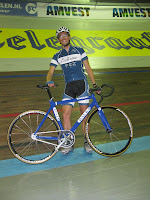 Just to clarify, those big billboards behind me may look like they're walls, but that's the actual track that we ride on! We also did some really fun "races" where we were all riding in line on the top blue line, then the front person would attack by dropping down to the lower part, picking up extra speed in the process, then jumping HARD to catch back to the tail end of the group and "take a lap." The first time it took me two laps, the second took me FIVE laps that seemed to take forever and years off my life!
Posted by Unknown at 18:05