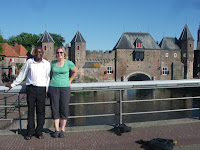 Amersfoort is the city that is closes to us in the Netherlands. We have a choice of about 3 or 4 different wasy to bike there but after 3 weeks, we have settled on one route that goes through a large park and is entirely on bike paths. The population of Amersfoort is approximately 130, 000 and it is a busy, active city. We go there for the train station, church,  museums, shopping, larger library, weekend market etc. Here I am at the city gates with Samson, another veterinarian from Nigeria at our church here. 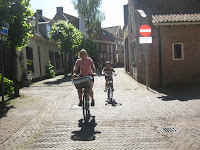 The first time the boys and I went, we biked around in circles and still you have the feeling of always being on the opposite side of where you want to be. The old city was built with city walls and canals around it and then the new city has expanded beyond it.  The three main museums here are Mondriaan House (see Stephen's previous blog), the Dutch Cavalry Museum and the Flehite Museum. We haven't been to the latter two yet but they are on our list. 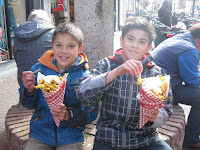 We think we may have found the best fries of our trip so far (don't tell the Belgians!). They are at Van Gogh fries (http://vangoghfrites.nl/) and they come in a big cone with mayo for the cardiovascularly brave.  They even have a happy hour on Friday afternoon when you can get fries for 1E. Almost, but not quite a good enough reason to skip gym practice.

There is a big tower in the centre of Amersfoort and it used to be attached to a church. The church burned down and was never rebuilt but the tower remains. What is impressive about the tower in addition to the fact that you can see it from all over the city is that it is in the geographical centre of Holland. 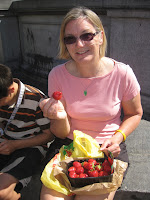 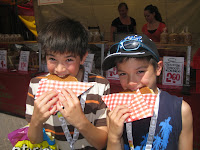 On Wednesdays, we go to the small market in Hoogland that is basically right outside our door, but if we are in Amersfoort on Saturdays we will go to the market there - lots of great fruit and vegetables (delicious local strawberries), breads, Greek dips and marinated mushrooms, fish, and big and warm stroopwafels. Yum...

There is an English-speaking church that meets on Sunday afternoons and Wednesday evenings (www.gracechurch.nl) and we have been getting involved there. 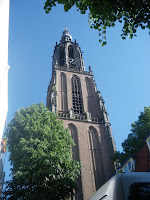 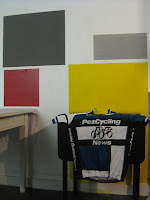 The tower of the geographic centre of Holland on the left. Stephen couldn't resist packing his Mondrian-PezCycling jersey to the Mondriaanhuis Museum.
All in all, Amersfoort is a city with everything we need and is close enough that we can hop on our bikes and get there in about 25 minutes.  There is even free underground bike parking!
Posted by Debbie at 13:31