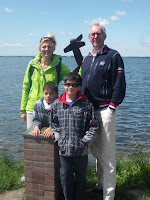 This past Saturday afternoon, Jacob, Zachary and I drove with our friends, Hein and Elly, to the town of Harderwijk where they were having a special day at the harbor there. Hein is the scientist that Stephen is visiting and collaborating with here in the Netherlands. They've known each other since 1995, when Hein was a visiting scientist at DCIEM where Stephen did his Ph.D. His wife, Elly, works in Amersfoort as a physical therapist for children. They live in the village of Soesterberg where Hein works at TNO, a well known Dutch research company. 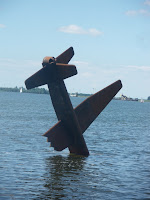 Harderwijk is also located on the "old land" side and across the water you can again see the reclaimed "new land."  In the water, we saw a new memorial that was just unveiled on April 12 2012, honoring 117 people who died in this area from air crashes during WWII. Walking along to the dock, Hein had to stop for a fresh herring sandwich, but the boys settled on deep fried mussels. 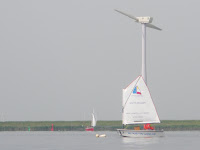 Elly tried her hand at a sail raising competition. The problem was that they had weight the sail with an extra 20 kg weight to make it a challenge.

The boys got a chance to go out in a little sailboat and have a cruise around the harbour. 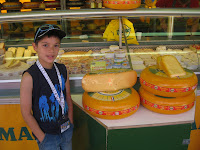 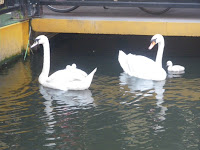 Our camera failed and Stephen had the other one in Italy, so here's some gratuitous Dutch cheese and swan photos instead!
There was a windmill in town that had been built in the 1700's and moved to this location in 1968. We were able to go right up inside it and see how everything worked on the inside. This windmill has previously been used to grind flour and also as a distillery for making liquor. It had a thatched roof and will all the wooden parts inside it is easy to see how windmills could catch fire with the friction of the parts and the heat produced by the brakes.
Posted by Debbie at 10:50