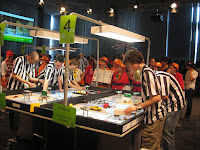 First Lego League Open Finals 2012 were held in Mannheim, Germany and there were 70 teams representing almost 30 countries. The teams had all qualified in their own countries at regional, provincial and national competitions. The competition was held in the Rosengarten conference centre which has a beautiful facade and is across from a welcoming park with a big water tower called "der Wasserturm." 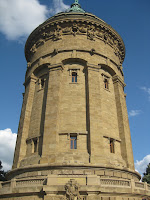 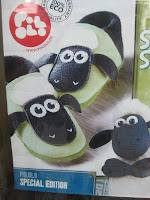 Each team was judged in a number of areas divided into core values, research project, robot design and programming and robotic games. The robotic games were the only part where spectators could watch and cheer for all the teams but each team also had a booth where you could meet them and ask them questions and they usually had some sort of game or give away  prepared. At one of the Swiss tables you used a Lego gun to shoot an apple from the hat of William Tell to receive a Swiss chocolate. The Slovenian Rooster team had handmade pottery medallions that they had made themselves. The team from Iceland had collected beach rocks and painted them with the flag and Viking symbols.   They also had posters and handouts showing their research and information about their country. 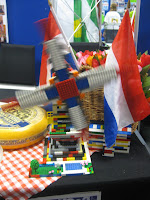 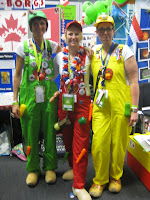 One of the Dutch team Lego and a group of Dutch coaches
The research topic this year was about Food Safety and it was amazing to see the ingenuity and the amount of work that went into these projects. The projects varied from better shipment of apples to protect them to filtering shell fish bits out of saltwater, making contaminated corn safe to eat by adding 2 certain spices, testing milk for evidence of mastitis, determining if an isolated town could survive on its own if it didn't have any imported products.  It was also interesting to see how different teams attacked the problem of how to build the robot, some were small and compact and others were big massive structures. 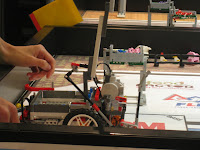 There were 2 teams from Canada. The Robo Raptors are a team from Stoney Creek with 4 members at the competition and 3 more still in Canada. Their project involved designing an automatic hand washing station to improve sanitation in restaurants.  They won a second place trophy for their robot programming for using a unique way of calibrating light sensors. The other Canadian team was from a school in Mississauga and they also won a trophy for their research project. They had looked at using UV light to sterilize equipment used with food. At first they had difficulty because the experts would talk to them because they were  "too young," but they persisted and came up with an excellent project. 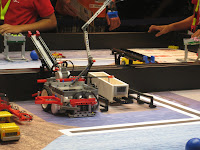 It was obvious that everyone was having a lot of fun there. I think the coaches were having as much fun as the kids, although some of them were a little stressed.  There were about an equal number of girls and boys and there were at least 3 all girls teams that I spoke to. Most of the teams were experienced having been together for several years but I met the Australian team of 3 girls ages (9,9 and 11) and it was their first year as a team and they made it all the way to this level. The most fun loving team seemed to be the Terminators from Ireland.  The award for the most indomitable spirit goes to one team from Israel who had a fire in their hotel the first night and lost everything - robot, passports, clothes. They showed real spirit and courage by continuing to compete in every category they could and greeting everyone with a smile and a taste of Baklava.

As a spectator, there was lots to see and do and everyone was friendly and willing to discuss their project. The kids have gone to so much work to get to this competition, it is obvious that they have learned many things besides just Lego and robotics.
Posted by Debbie at 18:04