May 12, my friend Astrid (far left), Eric (2nd from left) and I drove down to the Ardennes region of eastern Belgium, in the French-speaking Walloon region. Our purpose was to get in some big climbing and kilometres into our legs, taking in much of the same hills as used in the famous Liege-Bastogne-Liege classic. Eric and Astrid are training for the Alpe d'HuZes charity ride June 6-7, where they're aiming to ride up and down the famous L'Alpe d'Huez climb SIX times in one day! 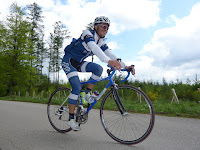 We started in the tiny town of Trois Ponts, near Stavelot (base of some of the most vicious fighting in the WW2 Battle of the Bulge), and did 5 different circuits of about 20 km each. It was intense, 107 km and 2700 m of climbing, much of it in the bottom gear and standing just to keep momentum! We took in the Col de Stockeu  and also the Cote de Wanne climbs used in LBL, but there were more than enough other climbs that they have no problems finding hills. 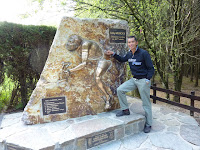 At the top of the Stockeu, we found the awesome monument to Eddy Merckx, 5-time winner of LBL and pretty much everything else. A tiring but great day, and the nearly 6h of riding will hopefully shock my system into some form of fitness again! This also means that I've now had the fortune of riding on the terrain of four of the biggest Classics in racing: the Ardennes of Liege-Bastogne-Liege, the cobbles of Paris-Roubaix and the cobbled climbs of the Ronde van Vlanderaan, and also the Limburg hills of the Amstel Gold Race!
Posted by Unknown at 19:19