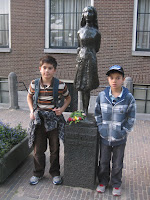 Since knowing we would be coming to The Netherlands, the Anne Frank House has been on our list of places to visit. This  museum is the actual warehouse and business in which Anne Frank and her family and 4 other Jews hid  during the Nazi occupation of Germany. The Secret Annex was in the back and upper part of the warehouse and business owned by Otto Frank. When they went into hiding there, they had written some letters to make it appear they were leaving the city. They were helped by Mr. Frank's business partner and employees.  Unfortunately, before the end of the war, they were betrayed and sent to concentration camps.  Otto Frank was the only one of the eight who survived the camps and returned. 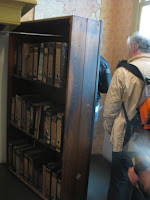 During their time in hiding, Anne kept a diary, which she called Kitty. She had gotten the first diary on her 13th birthday shortly before they went into hiding. At first she was writing just for herself, but when she heard on the radio a request for written notes and diaries about the war, she started rewriting the diary and editing it with the view of submitting it for publication.  After their arrest, one of the helpers (Miep Gies, Otto's secretary) who was not arrested, collected up the pages from the Annex to save them for Anne. Unfortunately, she never came back from the concentration camp.  Her father, Otto Frank, decided to publish the diary but he merged her personal diary with the rewritten diary to come up with a third version.

The Diary of Anne Frank has been translated into many languages. It has become a story synonymous with WWII history, but much of it deals with the thoughts and feelings of a young, teenage girl. There was about a 40 minute wait to get into the museum and then a slow line following along the rooms. Photos are not permitted, but this is the bookcase they built to cover the entrance to the secret annex. The museum consists of the rooms of the warehouse and Secret Annex but without the furnishings, which Otto requested to symbolize the emptiness of the world from these lost lives. There were some personal articles on display and audio-visual presentations in the different rooms.  Some pages of Anne's actual diary were on display but no pictures were allowed due to preservation concerns.
Posted by Debbie at 07:52